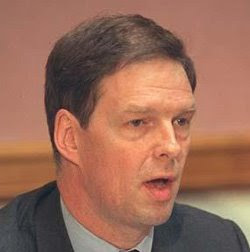 When it comes to government spending, I am seriously old school. Working for local government as a young man, I was schooled in an environment where everyone, from the boss downwards, was conscious that every penny we spent came out of taxes, extracted from people many of whom were less fortunate than ourselves, to whom we owed a duty to be frugal.

Not a penny was spent unless it could be justified, even to the point of absurdity, where the job actually suffered because we were not allowed to buy the necessary equipment when it was thought "too expensive".

I retailed some of those experiences in a post written nearly four years ago, where I had to threaten to resign just to get basic protective equipment, like an overall and a pair of wellies out of the council, having been refused because the boss thought it an unnecessary expense.

Those were the old days, when we were paid for 40 hours a week and routinely did sixty, with no question of overtime, because that is how long it took to do the job properly. Even then people grumbled. But we were local government officers, proud of what we did, nevertheless conscious, every waking hour, that we had to deliver value for money to justify our existence and to be able to look at ourselves in our mirrors when – as they were then – the rate demands went out.

That core experience never goes away and it thus shapes my view of the present controversy over MPs' "expenses", and the continuing revelations that are pouring into the media.

Unlike many, and in particular the media and political claque, I have no problem with MPs being paid well. To do that job properly – of which I have more direct knowledge than most – requires a special person, with special skills and a huge amount of dedication. It is not one I would be prepared to do, for any amount of money.

But the qualification is doing the job properly - providing value for money. If the MPs devise a system – which they have done – which conceals from the public exactly how much they are actually paid, disguising part of their payments as "allowances" rather than salary, I have no particular problem with that – as long as the recipients give value for money.

As it stands, against a headline salary of about £64,000, the actual value of MP's remuneration package – including their "allowances" and pensions, is in the order of £150,000. That is an extremely generous payment and for that, we are entitled to a great deal. And it is here that the "deal" begins to unravel, as we see the latest revelations and in particular those relating to Mr James Arbuthnot, chairman of the House of Commons defence committee.

Actually, I care not that he claimed "a series of payments made to maintain a home in Hampshire that he rented before buying a £2 million home without a mortgage two years ago," such payments including the maintenance of his swimming pool. Since these payments were, de facto part of his salary – as every political hack has known for many years – how he spends his money is entirely his own affair. No more do I expect scrutiny of his expenditure than would I expect public scrutiny of how I spend my pitiful income.

What does bother me, though, is precisely the issues I raised - whether he (and all the other MPs) earns his very generous salary - whether he provides value for money. In this context, we have followed more closely than many others, the career of Mr Arbthnot and, as an MP, it is probably fair to say that, in terms of hours spent, and effort, he works harder than many of his colleagues. But, in terms of effects achieved, it is also probably fair to say that he – and his colleagues on the defence committee – consistently fail to deliver value for money.

That is where I fall out with the claque, which is revelling in the discomfort of MPs, without addressing the substantive point. It is not what they are paid which matters, it is what they do for the money.

Roughly, in terms of salary equivalent, MPs cost us £100 million a year. On one project alone, the defence committee could have saved us that. Collectively, each year – through effective and robust control of the executive – MPs could save us billions. And, should they do so – and had they done so - they would be worth the money they are paid, no matter how it is packaged.

Having worked in and alongside parliament for well over 20 years, as a lobbyist, campaigner, researcher and analyst, and directly experienced all levels of government, from local authorities to the EU, I perhaps have a better idea than most what can and cannot be done, and the limits of power at each level. But I am convinced that a robust, assertive House could do far more than it is doing, and achieve far more – not by the "Punch and Judy" bickering that we see so often, but by steady, persistent resistance to the encroaching power of the executive.

Seeing from first hand what these wastrels could do, and what they do not, while plundering the public purse as payment for services not rendered, evokes the deepest, darkest hatred of the breed. There are exceptions, but they are few. We will have our reckoning – it is only a matter of time.