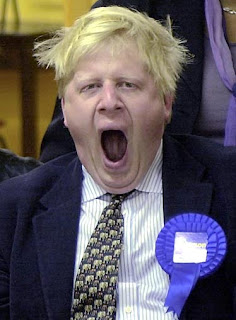 If Mr Boris Johnson, in seeking to revive Parliament, really thinks the answer is far fewer laws, as he professes in his op-ed today, then one of the most fruitful places to look is Brussels – from where most of our laws now emanate.

Needless to say though, in common with many of his class, he mentions not the EU, which makes him part of the problem rather than the solution.

This though, is what Iain Dale regards as "a thought provoking article", although he goes on to suggest that his [Johnson's] recipe is "flawed and simplistic". And indeed it is.

Such is Johnson's appreciation of the malaise afflicting parliament that he dismisses the idea of a constitutional convention – and thus any major changes to the way parliament is structured or run. Instead, in his own child-like way, he argues for

… a new breed of MPs who will consistently tell the whips to get stuffed; who will smash the brutal and intellectually enervating system of party discipline that turns Westminster into a kind of Seventies Leyland car factory, apathetically turning out badly assembled laws to plague the people of this country.

Thus his advice to constituency parties is not to hire candidates unless they promise to read every line of every Bill they are called upon to pass; and to vote according to their conscience, and not according to the wishes or orders of the whips.

The sad thing is that this is not even "Janet and John" entry level politics. He decries the party system but, in so doing, denies the very advantage it confers. Party specialists can examine law going through and advise on policy lines, thus allowing MPs to take a line in accordance with the policy to which they subscribe, without every single MP reinventing the wheel, and going through it with a fine tooth comb. This is a combination of specialisation and delegation. There is nothing wrong with that in principle.

The greater problem – far greater – is the flood of statutory instruments, which cannot be changed. That is part of the real biggy - EU law, much of it coming out as European Regulations, which come into force as soon as they are "done at Brussels", without ever coming near parliament. How does Johnson propose his "new breed of MPs" deals with those?

Further, his facile image of parliament stresses but one function of the institution – that of passing legislation. He neglects completely the equally important role of scrutinising the executive and holding it to account, at which MPs have proved less that capable, not least because there are fundamental flaws in the system which prevent this process being effective.

Iain Dale's piece, however, has provoked a number of comments, some good – and some not so good – but it is the makings of a debate. Latterly, he asks whether there should there be a UK-wide constitutional convention.

Arguably, the answer is "yes", but with the proviso that Boris is allowed nowhere near it. But if such a convention is to be of any use, it must deal with issues like the leaving the European Union, the separation of powers and then emasculating the quangos and agencies which have deprived parliament of so much of its meaning.

Echoing one of Dale's commentators, we have to say that, until these things are done, everything else is Elastoplast.