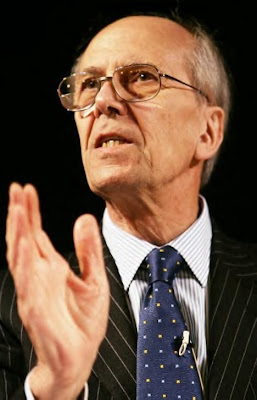 One could almost feel sorry for David Cameron. No sooner was he swamped by the wholly predictable stories of the way Conservative MPs have been abusing the expenses system (with James Gray nominated as duty sh*t) than he has the Chingford skinhead or, as Michael Foot put it, with the usual left-wing contempt for the working class, the semi-domesticated polecat.

Yes, indeed, it is of Lord Tebbit we speak who has just ruffled every single Tory feather. No wonder he had a big smile on his face when I saw him yesterday at the launch of Marta Andreasen's book. He knew trouble was coming and it was coming from him.

Most people know the story. In the wake of the spreading expenses scandal Lord Tebbit has called on people not to vote for any of the main parties in the coming European election. Reasonable enough and, as so often with Tebbo, a sentiment that echoes much of what the electorate feels. Furthermore, he very carefully did not suggest that they should vote for any other party but the general feeling is that he was covertly promoting UKIP, whose officials are purring with delight even as I write this.

Despite that there have been calls for the whip to be withdrawn from Lord Tebbit, as it was withdrawn from Stuart Wheeler, who was also there yesterday and did not seem too upset about no longer having to give large sums of money to the Tories. (We covered that story here and here.)

Jonathan Isaby has called for the man's head ... errm, whip ... and raised quite a storm in the comments section. Tim Montgomerie, the online begetter of ToryBoy blog disagrees and thinks this is a storm in a teacup that should be left to die out.

Most other commentators seem to think Isaby is wrong for various reasons, not least because some understand how throwing Tebbit out of the Conservative Party will play with the electorate. Some think he should be left in the exile he is in, which appears to be on the pages of the Daily Mail. Some exile. Is that not the second most popular daily newspaper in the country?

There is one chap who says this is only Tebbit's effort to drag the European issue into the discussion and thus split the party. It was rightly pointed out by another commenter that we are about to have European elections and, therefore, the European issue might be of some interest.

David Cameron, it would appear, is also threatening to make Lord Tebbit into an Independent. Well, well. Can the man be really that stupid?

The truth is that, no matter what the various posters say on ToryBoy Blog, Cameron's promises to deal with his MPs may sound good but who is actually going to believe them? Tebbit has left the party in something of a quandary.

Cameron's instinct, one assumes, is to throw the man out, not least because he reminds people of what the Conservative Party once was. But that very fact makes the action quite difficult. Just a few days ago the entire Conservative Party, many rather nauseatingly and hypocritically, was celebrating the thirtieth anniversary of the first Thatcher victory with more than a few drooling comments on how it will be just the same next year. (Cameron as the new Thatcher? I think not.)

How will it play now if Thatcher's closest lieutenant, the man who resolutely has resolutely fought and still fights all enemies of true conservatism, who suffered shockingly in the Brighton bomb, is thrown out of the party because he dares to point out that politicians who were caught with their hands in the till (entirely within the rules, naturellement) should not receive the electorate's approval.

How will it play if Cameron is seen to be tougher with the man who points to the wrong-doing and points out that in a democracy the electorate can deal with these matters than with the wrong-doers themselves? Will that bring in the Conservative vote? Again, I think not. No wonder UKIP is purring.

Then there is another aspect that we referred to when the Wheeler saga unfolded. After all, Ken Clarke once opposed a core Conservative policy on the referendum and sided with the Labour government. Did he lose the whip? There was the unfortunate episode of Patrick Mercer and John Bercow joining Gordon Brown's big tent circus though Mr Mercer realized after 33 days that he had been had. Did they lose the whip? No sirreee. Siding with the main opponent, the Labour Party is no longer a cardinal sin in the Conservative Party but even the slightest hint that UKIP should be the choice in the European elections is.

What other evidence would the electorate need for the fact that there is no difference between the main parties. There is just us and them.