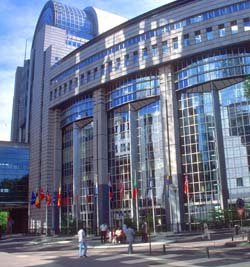 One is inclined to hurl some incredibly rude remarks in the direction of Ilana Bet-El, writing in The Guardian today. "There is one issue upon which all Europeans, from all political hues, would probably agree," she tells us. "There is a democratic deficit in the EU."

Point one: there is no such thing as a "European" darling, not in the sense that you mean it. Point two: there is no "democratic deficit". That is false framing, suggesting that there is some defect that can be remedied. On the contrary, the EU is fundamantally anti-democratic, by design. As a democracy it could not function.

However, having thus falsely framed the argument, la Bet-El then compounds the offence, telling us that, "With some reservations by Eurosceptics on the one hand and EU fanatics on the other, most people would probably also agree that the elections to the European parliament are currently the only way of addressing the deficit."

Point one: most "Eurosceptics" would conclude that that the best way of remedying the "deficit" is with a thermo-nuclear device, detonated 10,000ft above Brussels. As is so often the case with the type, Bet-El labours under the illusion that, because MEPs are elected, that is in some way "democratic". She confuses form with substance.

In the fog that passes for the brain of la Bet-El, she thus believes that the parliamentary elections "offer citizens an opportunity to give a direct opinion upon the institution itself and the union in general." On that basis, she opines that "it is time to take the upcoming June elections seriously."

Of course, some "citizens" sent the union a message, in the French, Dutch and Irish referendums. And a fat lot of good that did. Sending a bunch of low-grade nonentities to join the gravy train in Brussels delivers precisely what message?

As for the effect on "democracy", after the batch of publicity on the Tory shadow cabinet, Gerald Warner articulates the thoughts of many:

So, if you are thinking "Gosh! I can't wait until the Tories come in and replace sleazy Labour," you have failed a very basic intelligence test. If you imagine voting for any of the established parties at Westminster will achieve anything other than your further impoverishment, exploitation, oppression, and being treated with contempt by the fraudsters who despise your gullibility, you deserve everything that will subsequently happen to you. Vote Tory? In your dreams, Dave.

We are far from alone in believing that a major beneficiary of this furore will be the BNP. Taking la Bet-El at face value, though, I cannot think of a better way of giving "a direct opinion upon the institution itself and the union in general," than sending nationalists to sit in the heart of darkness.

You could even say that the BNP and the EU deserve each other.