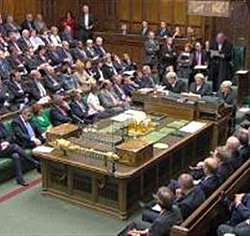 That the MPs got themselves into this mess is one thing. But, as John Nagl once said, "mistakes are made in war, the only crime is in not learning from them."

So it is with politics. With attention focused on the Speaker, we now learn that he is to announce his resignation later today, thereby casting him in the unusual role of the "guilty" scapegoat, an unfortunate animal so laden down with its own sins that the many more piled upon it makes no difference.

But, in turning a profound crisis into another episode of the ongoing soap opera, with its accent on personality politics, MPs are demonstrating that they have learnt nothing – and are incapable of learning. Tony Benn has it, saying, "This idea you can put it all on the Speaker is absolutely wrong. This cannot be turned just into a personal drama because it gives MPs a way out."

Needless to say, the prospect of a scalp has the claque bubbling over with joy, thus illustrating that unfortunate characteristic of the "crowd" – a race to the bottom, where the collective exhibits animal instincts rather then intelligence.

So the crowd will have its blood, that vain, stupid, lumpen mass, incapable of seeing beyond the morrow. And when the morrow comes, nothing will have changed. A new face will peer from the canopied chair and the soap opera will continue. Like all fantasies, though, there is no substance and, soon enough, the crowd will be baying for new blood, never to be sated.

And, when the election comes, what will the crowd do then? My co-editor has some thoughts on this matter.

But make no mistake. These are dark days. We are seeing another, and major lurch towards the destruction of our democracy. The more the claqueurs cheer, the more certain it becomes. Our MPs are in the throes of collective suicide and we, as a nation, are set to join them.