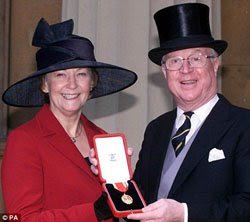 The boss will do a far better and more measured piece about the news that both Wintertons are to step down at the next election. He knows them, especially Ann, far better than I do.

However, I want to point to the reactions to this piece of information. With some exceptions they have all been gloating. What people recall is past nefarious experience with expenses, though this time round, both Wintertons are high up in the list of "cheapest MPs".

What very few people seem to have noted is that both Wintertons are in the Better Off Out group and have been since its inception but then, I suppose, that is not something to be proud of, as far as most Tories are concerned; too much like rocking the boat.

What even fewer people have noticed is Ann Winterton's dogged campaign of questions about defence and procurement that has frequently had HMG and MoD on the back foot and has produced a good deal of information that those institutions would have preferred not to produce. As against that personal failings (oh yes, I remember those jokes!) ought to be a minor detail.

Which does make one wonder what do all those people who insist on commenting about political events really think MPs should be doing.