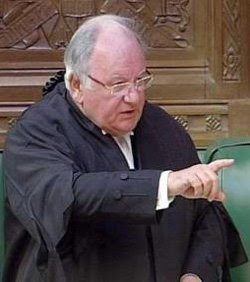 Looking past the gown, one sees not the holder of the third most important office in the land but a frightened little man, totally out of his depth, with not the first idea of how to extricate himself from the growing pile of ordure that has cascaded over him.

Thus, Speaker Martin has not in any way even begun to turn the tide with his apology to "the men and women of the United Kingdom", delivered on behalf of the House as a whole, with an admission that "we have let you down very badly indeed".

"I am profoundly sorry," he went on to say, but if there was any meaning to the apology it was destroyed by his obvious failure to understand what had brought Parliament to the crisis which is steadily destroying it.

If the Speaker is frightened though, we – the men and women of the United Kingdom – have every reason to be more so. Not only did the Speaker fail to offer any sign of understanding as to the reason for Parliament's predicament, neither did any of the other "Honourable Members" who spoke in what were supercharged exchanges.

The closest anyone got to it yesterday was Richard H Turner of Chesterfield, Derbyshire, in a letter published by The Daily Telegraph. Referring to the op-ed by Charles Moore last Saturday, Mr Turner agrees that the problem stems from "wholesale losses in the authority of Parliament."

In particular, Turner argues that the "watering down of draft legislation permits ministers to force through the contentious aspects by statutory instrument and Order in Council," a reference to the way the government has progressively been able to by-pass Parliament as a legislature, turning the Houses into little more than faded rubber stamps.

Turner puts this loss of authority in the time frame of the last 10 years of "quasi-presidential management under the previous prime minister," but, of course, the rot started long before that. Blair simply continued and reinforced a trend which had started nearly thirty years before he took office, with the European Communities Act.

It was this Act which enables governments to implement what is now EU law, often encompassing hundreds of pages of provisions which dwarf all but the most ambitious Bills. And so convenient did the government find the process that it has adopted it for most of its legislation, effectively robbing Parliament of its meaning.

It is this loss of authority that lies at the heart of the current crisis. Long before it broke, people already had begun to realise that much of what went on in Westminster was a hollow charade. The "expenses" issue is simply the "rock" on which the crashing waves of public contempt have broken.

Thus, fixing the expenses system is going to have no effect whatsoever. Even purging the current Parliament and replacing it with a brand new, squeaky-clean cast of actors would not make the slightest bit of difference. Parliament has been broken for decades and fiddling with the petty cash system is not going to mend it.

The tragedy is that no one in that House yesterday was even prepared to admit the true reason for the decay, all of the Members gripping tight to the illusion that tinkering at the margins of a broken institution is going to restore the status quo.

Even worse, the House, in seeking collectively to unload their sins on the Speaker – to add to the many of his own – seems to be indulging in a crude ritual of expiation, believing a new man will somehow sweep away their guilt. But since a new Speaker cannot – and therefore will not – address the fundamental causes of the institutional decay, this option will provide no lasting relief.

It is yet another panacea, to add to the many already being proposed.

UPDATE: Great minds think alike – see Steve Richards in The Independent. Needless to say, though, he does not mention the elephant in the room.