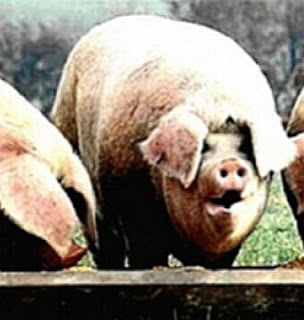 "If the established parties have their way, the prospects for change in Brussels vary between fat chance and no chance," says The Sun.

In truth, that applies no matter what party gets MEPs elected. All we are doing is choosing which pigs get their turn at the trough. And, as The Sun tells us, it is a very big trough - a "whopping salary" of £83,282 taxed at just 15 per cent.

"Then there is the £260 a day attendance allowance, famously known as "SOSO" - Sign On and S*d Off. Yet for the few hours they do put in, they are entitled to claim almost £36,778 a year in food and booze - enough to feed several entire families. Plus hundreds of thousands more for office costs and staff allowances - often paid to spouses and family members."

We the people … get to pick the pigs. Why are we allowing this to happen?