A little more on the Czech situation 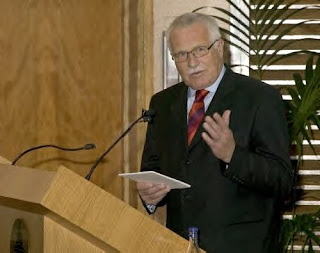 My first reaction to the suggestion that I should blog again about the Czech Republic and the Constitutional Lisbon Treaty was "yeah, whatever", which is the way I react to people's suggestions that I should do something I don’t want to do. But, well, whatever, I'd better bring people up to date.

First of all, here is the full text of President Klaus's statement made in the wake of that vote in the Senate:

I must express my disappointment that following unprecedented political and media pressure from both foreign and domestic sources, some Czech Senators retreated from the publicly expressed views they held until recently, undermining thereby their own political and civic integrity, and have agreed with the ratification of the Lisbon Treaty.

They thus turned their backs on the long-term interest of the Czech Republic, putting before that the short-term interests of current governmental office-holders as well as their own personal interests.

It is a sad evidence of another failure on the part of a significant element of our political elite, which parallels other bad moments in Czech history. Our politicians
have always found some cowardly reasons for actions of this sort: We are too small, too weak; we do not mean anything in the European context; we must conform even if we do not agree with what we are conforming to.

This is something I reject. We either regained our sovereignty after November 1989, and together with it the responsibility for the fate of our country, or it was all a tragic mistake. This is a very topical point to make in the year of the twentieth anniversary of November 1989.

My views on this matter are known and clear. I cannot afford to be resolutely against something at one moment, and then, because it fits in with my personal political career objectives, to pretend to change my opinion.

Let me emphasize that for this moment, the Lisbon Treaty is dead, because it was rejected in a referendum in one of the Member States. That is why my deciding on the ratification of this Treaty is not the issue of the day.

It is good to see that he is placing blame where it belongs – on the shoulders of Czech politicians because history tells one that the latter are apt to blame other people for their own shortcomings.

The outgoing Prime Minister, Mirek Topolanek, for instance, has been trying to convey the impression that he does not really like the treaty but that he is being forced into supporting it because otherwise the Czechs will be sidelined within the EU. Presumably, if things go wrong and questions are asked why nothing was gained and much was lost by the Constitutional Lisbon Treaty, he can wring his hands just as President Beneš did in the run-up to the Second World War and afterwards.

It is, as ever, a pleasure to hear unelected Commission President Barroso talk absolute rubbish, solemnly and uncritically reported by the Financial Times:

Fascinating. I wonder if the Commission President has actually read the treaty; or maybe he just does not know what the words democratic and accountable mean. Given his political career the latter is entirely possible. He is, after all, a man who has gone from being a Maoist to being President of the European Commission with a few stages in between but no real changes in his views, one suspects.

Meanwhile, Die Welt, of all newspapers is suggesting that the EU could work very well with the treaties as they are now and there is no real need for the Constitutional Lisbon Treaty, should it fail at the second Irish referendum. That may have more reference to the situation in Germany than in the Czech Republic.