Out there in the big bad world ... 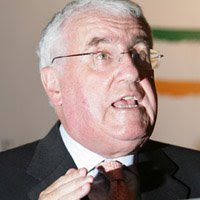 ... where an astonishing number of people have never heard of Nadine Dorries, despite the overwrought statements she makes, the debate seems to be hotting up. Yes, dear readers, I mean Ireland.

Thanks to Dr Anthony Coughlan of the National Platform we hear of an interesting letter by Dick Roche, Ireland's Europe Minister (pictured).

Replying to a letter by a Richard Murphy in the Irish Examiner, Mr Roche gets quite venomous. Mr Murphy had, apparently, proposed that the second Irish referendum should not take place till after the British general election, which is likely to bring in a Conservative government. With the Lisbon Treaty not in place, the Conservatives have pledged to have a referendum.

Mr Roche pours scorn on Mr Murphy's trust in the British Conservatives. On the whole I share that point of view but Mr Roche is not concerned with their rather feeble attempt at standing up to the juggernaut.

Having first informed the readers, somewhat erroneously (if we are to speak charitably) that the Lisbon Treaty will be modified by the various legal guarantees now under negotiation (it will not be modificed), Mr Roche goes for the jugular:

His faith in the Tory party is touching. I wonder what in the history of that party’s dealings with Ireland makes him want to put our future in Tory hands? Perhaps he hankers after the union we left in 1922 and sees our future in a more intimate relationship with a Tory-governed Britain.

Ireland's future, Mr Roche tells the readers, must be decided in Ireland, not in London. A fair point but why is Mr Roche wanting to have Ireland's politics decided in Brussels? Why is he insisting that the people of Ireland could not have known their own minds when they voted against the Constitutional Lisbon Treaty and need to vote again?

Ireland's Europe Minister Roche has spent the last year pressing various Governments in other EU countries - Sweden, the Czech Republic etc - to complete their ratification of Lisbon as quickly as possible so as to isolate his own country politically and put maximum pressure on Irish voters to reverse last year's rejection of Lisbon in the referendum re-run the Irish Government intends holding in October.

The Minister's letter shows his concern that if Irish voters become aware of the Conservative commitment to a UK referendum on Lisbon if it is still unratified when they come to office, it will make it harder for him and his fellow Yes-side campaigners to threaten Irish voters with isolation if they stand by last year's vote in the Lisbon re-run.

Could the Minister be worried? Charlemagne at the Economist thinks he has reason to be worried. Charlemagne is worried, too. Those uppity Irish might not listen to their betters once again.