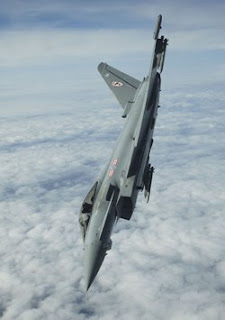 It is an aircraft that this government does not want, does not need and cannot afford. But such are the delights of European co-operative ventures that we are getting it anyway, and paying handsomely for the privilege.

This is, as you would imagine, Heseltine's baby, the one and only Eurofighter. Gordon Brown has given provisional approval to buy the first part of Tranche 3 and, for those who attribute all power to Brown – and therefore are happy to offload the responsibility for all ills upon him – his experience is a salutary lesson in the limits of power.

Faced with the combined lobbying of RAF chiefs, defence contractors, our European "partners" and the pressure from backbench MPs, all anxious that their voters should share in the pork barrel, the prime minister had no option but to buckle under the weight and agree to the further purchase.

Just how many will be bought, though, is still something of a mystery and the MoD is not helping out with any figures. According to The Times some 92 are pencilled in for the RAF, although sales to Saudi Arabia and possibly Oman may be used to offset the final figure.

The Financial Times reports that Britain's liability may be reduced to ordering 16 aircraft, once exports are taken into account, but that still leaves us with a bill of about €1.6bn to find out of the defence budget.

The price is a further delay in building the Royal Navy's carriers and FRES has also been put on hold – not that it was actually on the front burner anyway, but, predictably, senior Army figures are less than happy. "We keep buying things that are irrelevant to the current fight in Afghanistan, yet we are starving the very army who are in the fight," says one.

Another senior military figure cited, was no less cynical about the usefulness of the aircraft, arguing that they were a cold war relic designed to fight Soviet aircraft. "In my view the best thing we could do would be to buy the planes and cut them up," he said – recognising that whole life costs could be ten times the original purchase price.

The debate will, of course, rumble on. But there us one thing the Eurofighter has done for us, although we have paid dearly for the lesson. It has reaffirmed that multi-national co-operation on defence projects – and especially with our European "partners" - is a recipe for an expensive disaster over which we have no control.

Now, if that thinking could only be extended to the rest of the European project, then building this aircraft might have been worth it after all.