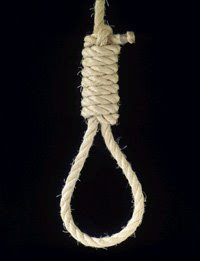 "Does anyone care?" comes a plaintive voice from the corner of the internet, via a single e-mail, the proximate cause of the grief being a piece by Ambrose Evans-Pritchard headed: "Europe tightens regulatory noose on City".

The European Commission, Ambrose tells us, has seized on the financial crisis to bring the City under closer EU control. It is clipping the wings of Britain's Financial Services Authority, unveiling far-reaching plans for a new EU regulatory machinery with binding powers.

This was predictable, if not predicted, the EU being the past master at exploiting the "beneficial crisis". This, in October last year, when we could be bothered with such things, we wrote:

Also, we wrote, in respect of the treatment of parliament by the government:

At that time, I added, "We will be the losers – we are the losers. In no manner, shape or form are we any longer a parliamentary democracy." So it has come to pass.

As the media are locked in the daily soap opera of MPs' expenses, truly turning our parliament in that "object of contempt", our real government is hard at work, set to destroy one of the most productive and valuable parts of our economy, the City of London.

In a sane world, we would be storming the ramparts on this. Our MPs would be up in arms, with "Questions in the House", urgent debates, strenuous, aggressive and even angry interrogations of ministers, with frenzied headlines in the newspapers. Dream on.

I have often wondered why we don't get worked up about what is going on in Brussels, especially when something as important as this crops us. And the answer is probably beguilingly simple: because it is "over there" – out of sight, out of mind. We simply cannot engage with something that is so remote, so distant and er … well, foreign.

When I was over in Brussels, after a while British politics looked just the same. Heavily immersed in EU politics, you used to read the British papers in the morning over a cup of coffee. The headlines and the stories were just words on pieces of paper. You could not relate to them, there was no engagement, no fire – it was all "over there".

For, politics to mean something, you must be part of them – have a stake in the issues. There is nothing quite so boring as other peoples' politics. Thus, the oft-quoted axiom, "all politics is local" – attributed originally to US Congress speaker Tip O’Neill – needs to be turned round. For them to be politics, they must be local.

That really is the problem with the EU. It takes "local" - i.e., national - issues and detaches them from their natural constituencies. By this means they become unreal, distant and meaningless. Only when they come back to Westminster do they become real again, by which time it is too late. The decisions have been made, the deeds have been done – the horse has bolted.

So it is that we have this surreal euro-election campaign. Naturally, the politicians focus on the domestic issues – those are what matter to voters. The EU is not a "domestic" issue. Even after all these years of Brussels being our government, news editors still report EU business as "foreign affairs".

That is why, of course, we must get out of the EU. It is not only a question of getting our country back – we want our politics back.