Just us and them 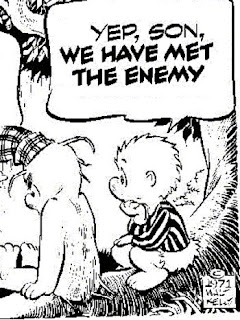 In an interesting tax site we get a commentary on MPs' tax liabilities:

The law in regard to expenses for overnight stays away from the MP's only or main residence is stated in the Income Tax (Earnings and Pensions) Act 2003, section 292:

(1) No liability to income tax arises in respect of an overnight expenses allowance paid to a member of the House of Commons in accordance with a resolution of that House.

(2) "Overnight expenses allowance" means an allowance expressed to be in respect of additional expenses necessarily incurred by the Member in staying overnight away from the Member's only or main residence, for the purpose of performing parliamentary duties—

(a) in the London area, as defined in such a resolution, or
(b) in the Member’s constituency.

The first point to note, we are told, is that the exemption from tax is provided to any expense paid in accordance with a resolution of the House of Commons. There is no qualifier for tax purposes that the expense be laid out wholly, exclusively or necessarily. The only recognisable qualifying condition comes in S292(2), which requires that the allowance is "expressed to be" in respect of additional expenses necessarily incurred by the member … in performing parliamentary duties …

Thus, the author believes that the expense payments are exempt from tax if they "are authorised by a resolution of the House and are expressed as payments of amounts necessarily incurred for the performance of parliamentary duties." Note that the test is what the expenses are described as rather than what they are actually in respect of.

What it looks like, therefore, is that MPs have not only granted themselves very substantial, covert pay rises, they have rather neatly passed into law their own tax immunity. And, of course, the original clause was written into the Bill (as was) by the Blair government, from which the then prime minister was to benefit hugely.

It is interesting to note, however, that the MPs' generosity to themselves did not extend to their colleagues in local government. These are the rules set out by HMRC:

Readers will know that I have been fairly relaxed about the amount of money paid to MPs, being rather more concerned about value for money than the sums involved.

However, while one can accept in principle that MPs might need to be paid more than their current headline salaries, it is totally unacceptable that they should then specifically pass an Act of Parliament which excludes them from paying tax in circumstances where everybody else would incur a very substantial tax liability. These people have quite deliberately placed themselves above the law.

As my co-editor wrote recently, now "There is just us and them". She was (and is) dead right.

Update: The tax wonks are having great fun – there is more to this than meets the eye. By the time a few tax lawyers have chewed over the details, there could be some holes emerging.