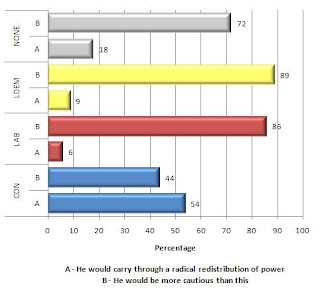 Good work by PoliticsHome tells us the scale of the mountain Mr Cameron has to climb to convince people that he means what he says.

Needless to say, in the tribal nature of politics, 54 percent of Conservative supporters "think" (if one can use such a word in this context) he would deliver, as against 44 percent who think not.

We would tend to go with the 70 percent, not least because – in our view Cameron has made promises (or implied that he will take action) on issues where he can either not deliver, or has no intention of so doing. As such, even James Slack of The Daily Mail notes that the man has left "wriggle room".

Of the various commentators, Melanie Phillips echoes our caution, noting that Cameron’s words were good, but "he must know that if the public perceive that the policies on offer don’t match up to the fine rhetoric, then far from remedying public alienation from the political class he will merely deepen it still further."

Simon Jenkins in The Guardian writes under a heading which proclaims: "Cameron can talk the talk, but that's no longer enough". Scepticism, he says, is justified by evidence. Every modern government promises to cut waste and bureaucracy, and duly increases them. Unless politicians have the guts to say how, they deserve a hollow laugh. This, not some trivia about expenses and tinkering with parliament, is the rot in the system.

In most states, he adds, constitutions enshrine the separation and devolution of power. In Britain, students are taught that tradition and the probity of the ruling class are sufficient guard against elective dictatorship. It is no longer enough. That is why I believe that only a written constitution will free us from reliance on the wishy-washy, easy-to-discard pledges of leaders such as Blair, Brown and Cameron. The game is up. Their word is not to be trusted. Liberty from overpowering government must become compulsory.

Even The Daily Telegraph utters a note of caution, warning that "Cameron must follow bold words with action". Failure to follow words with action, he says, "will only further erode public trust in politicians."

Only the Tory claque seem genuinely enamoured with Elastoplast Dave's shining words, with young Daniel Hannan trilling that the "radical proposals" endorsed by David Cameron are the answer to life, the universe and everything.

Tribal Tories are so easily pleased, but the rest of the population is not. We look upon political "promises" with weary cynicism, having been led up the hill so many times only to be led down again, our expectations deflated. That is not to say that we cannot be pleased – simply that words are no longer enough … and we have long memories. Fine words may buy time, but it really is time to stand and deliver.

Devil's Kitchen is not terribly impressed and a Tory Diary commentator says: "Don't try and divert the public's attention it will come back to bite you if you do and may well cost you the next election". Indeed! Cameron had better be serious about this. If he is not, he will find that we are.