The crowd is always wrong 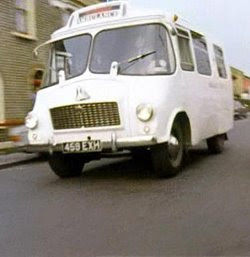 One of my abiding memories as a very young child was when I was out with aged parent, about to cross the main road – at a point where there was a central reservation.

On that reservation was a lady, herself about to cross the second half of the road. She looked in the direction of the oncoming traffic, saw it was clear and stepped from the safety of the kerb … only to get smacked by a speeding ambulance driving on the wrong side of the road, on its way to an emergency.

I never did know whether she lived, but the ambulance was one of those funny-shaped Austins with a fibreglass body (pictured) – it was a mess, so I guess not.

Anyhow, it is memories such as that which shape attitudes. Even crossing one-way streets, one tends to look both ways … you never know, and you only have to get flattened once. There isn't a second time.

So it is with politics, as we averred in an earlier post (and some others), if the crowd is looking in one direction, you always look the other way – to see what else is coming. In thus advising, we called in aid Mark Twain and his injunction: "Whenever you find that you are on the side of the majority, it is time to pause and reflect."

With this in mind, it is fair to say that whenever it is gripped with an obsession, or - as Matthew Parris put it – in one of its "periodic fits of moral horror", the crowd is always wrong (See Gustave Le Bon here - caution, 129 pages Pdf). We see that most often in the scare dynamic, whether the "poison eggs" of Edwina Currie, Mr Hogg's "Mad Cow disease" or the current obsession – global warming.

But the other absolute constant is that, virtually in proportion to the depth of its obsessions, the crowd hates being told that it is wrong. It resents any contrary voice and often directs more vitriol at those who dissent than at the original object of its ire. This we see so clearly with the ravings of the warmists, who attack so readily those they believe to be "climate deniers" who are seen to question their religion.

So it is with the political claque. You are either with them or agin them – there is no halfway house. This time, the first to mount the attack is the chatouilleur extraordinaire - the thinking man's reason for voting UKIP.

Conforming absolutely with the archetype, he lays into this blog with a gusto, fortified by the authority conveyed by weighty pieces such as this and this.

The subsequent debate is entertaining, but also important. My co-editor and I disagree on many things but on one we are completely agreed. The British political blogosphere is seriously underperforming, and as we observed recently, is dominated by self-referential, introverted lightweights, of which our chatouilleur is a classic example.

The interesting thing is that, while the MSM is deemed to be fair game for the bloggers – even though in this crisis we are getting better quality input from the traditional journalists than we are the claque - the blogosphere somehow seems to feel that it should be immune from criticism and gets rather overheated when one of its own "breaks ranks".

But the trouble is that the blogosphere, by and large – but with occasional exceptions – is part of the crowd, exhibiting the range, depth and perspicacity of the eponymous "man-in-pub". That is its choice. But until it grows up and matures, it remains part of the entertainment industry rather than a political force.