There for the taking 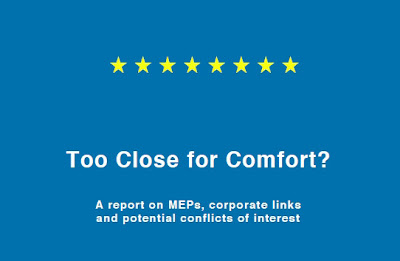 With only a week to go to the euro-elections, attention is beginning to shift to the creatures we are to send to Brussels, supposedly to represent us in the heart of evil but, in fact, to represent the EU to us.

And, if our MPs are turning out to have feet of clay – or some of them – the tiny spotlight that is illuminating our MEPs suggests that many are every bit as foul and grimy as the worst of the domestic species.

With The Sun having a go yesterday – and with a reporter full-time in Brussels digging up dirt – today is the turn of the The Guardian, citing a report from Spinwatch on the less than salubrious habits of some of these creatures. Greed, it appears, knows no boundaries – which comes as no surprise at all.

Meanwhile, The Financial Times is desperately trying to stoke up some interest in the elections, countered by Daniel Hannan who wants the EU parliament closed down and the powers handed back to national legislatures. Fortunately for his bank balance, which will be better off to the tune of £83,282 a year – minus 15 percent tax – no one who matters is likely to be listening to Hannan.

Jack Straw, on the other hand - according to the BBC - is with The Financial Times in trying to breathe new life into the euro campaign. But in so doing, he demonstrates the fatuity of the whole idea of an election. His pitch is that there is "anecdotal" and polling evidence to suggest that voters were still interested in the "real choices" they faced on bread-and-butter issues such as law and order. Thus, to win euro-seats, Straw is accusing David Cameron of being "soft" on crime.

Cameron, for his part, is accusing the BNP of being "fascist" – which is rather like accusing a dog of having four legs.

Being confronted at an agricultural show in Somerset by a voter who told him that the BNP "have a point when it comes to immigration", Cameron came up with the most extraordinary statements. "There is a proper national debate that we should have about immigration … I want us to limit the number of people coming to Britain, but do not believe that the way to beat the BNP is to half agree with them. These people are not pleasant people."

The extraordinary thing is that, having studiously ignored – and even suppressed – any debate on immigration, thereby giving the BNP its opportunity, Cameron tells us that there is "a proper national debate that we should have …". The term "should have had," might have been more appropriate. In the last week of the campaign, it is now too late. The moment has passed and the "not pleasant" BNP is going to reap its harvest of neglect.

However, Labour's Alan Johnson is drinking from the same well as Cameron, telling us that the big political debate would take place among the mainstream parties. Labour, he said, "had the ideas and vision for the future".

Call me quaintly old-fashioned, but it used to be the case that politicians had the debate before the elections, in order better to inform the voters and to assist them in making their choices. Now, it seems, we must vote blind on the promise of a future debate, the pitch being that we must only allow this to happen "among the mainstream parties".

In what is already a bizarre campaign, which has been dominated by anything but EU issues, this really takes the biscuit. "Buy now and read the label when you get home," seems to be the message. If we needed any more evidence that the political classes have lost it, it is there for the taking.