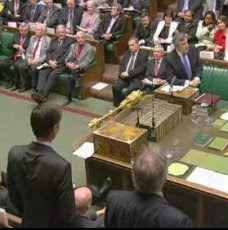 As usual, the claque has today avidly followed the drama of PMQs, blogging every minute of them and coming up with their fatuous score cards.

But, while the "high politics" of the weekly joust between the prime minister and the leader of the opposition grabs the lion's share of attention, scarcely any notice is taken of the boiler room(s) – the select committees where the important work of parliament is, or should be done.

However, when it comes to "value for money", this is where Parliament should be earning its keep, scrutinising in detail the policies of government and their implementation, in recognition of which the chairmen of the committees are paid an extra £20,000 a year over and above their normal parliamentary salaries.

When it comes to the Defence Committee, therefore, not only does its chairman James Arbuthnot get his swimming pool cleaned at the expense of the taxpayer (although he is repaying that), he also gets an emolument for a part-time job which is more than most people earn.

It is all very well raising Cain about MPs' expenses, therefore, but it would help if some note were taken of MPs' salaries, what they actually did for their basic pay and then – where there are generous add-ons – whether they delivered value there as well.

In respect of the Defence Committee, however, we have averred that the MPs and chairman give very poor value for money, a defect which probably applies to most committees, as was picked up recently by The Times, if only in terms of attendance records.

What brings this to a head once again is that the journal Defence Management has reported the Panther story, in particular picking up on what we broke last night, their story going under the heading: "£20m for upgrades to undelivered vehicle".

DM records that the MoD has paid millions to BAE for urgent upgrades to the Panther command and liaison vehicle (CLV) on top of the nearly £160m it has already spent in procuring the vehicles, and notes that, "The revelation that the MoD had to pay extra for upgrades before the vehicles were ever delivered or introduced to troops will only add to the growing criticism of the nine year old programme."

The fact that this is a "nine year old programme" is in itself remarkable but the longevity has also afforded the Defence Committee ample opportunity to examine it, not least because the vehicle is taking so long to introduce into service.

Yet, while the redoubtable Ann Winterton has been highly critical of the machine (without extra pay), we can find no trace of the Defence Committee ever having looked at the project. All I can find is one member of the committee, Robert Key, complaining that the Panther is not to be issued to the Royal Military Police. (This is the same Robert Key who, incidentally, welcomed the introduction of the Vector).

This is only one project on which the committee has dropped the ball, pleading that there are too many issues to cover. Yet, as with most of the committees, it is very rare to see a "full house" during evidential sessions, which makes you wonder what the MPs are doing with their time.

When it comes to issues it chooses, the committee has just announced that it is to conduct an inquiry on the contribution of "ISTAR (Intelligence, Surveillance, Target Acquisition and Reconnaissance) to operations" – even though it completed a very similar inquiry last year. One can but wonder at the priorities, especially as this is an area where the military, if anything, seems to be getting its act together.

The broader point which arises from this, though, is the old one of quis custodiet ipsos custodes? We can create all sorts of elaborate controls to stop MPs from abusing their expenses system. But how do we make sure they do their jobs properly? As the man said of the "custodes" … "qui nunc lasciuae furta puellae hac mercede silent. Crimen commune tacetur."