The official reports do not always give the locations of the strikes but, for the date, Monday 4 May, the closest match tells of Navy F/A-18F Super Hornets and an Air Force B-1B Lancer being called to carry out air strikes during an engagement between anti-Afghan gunmen and Afghan national police. The jets hit several enemy fighting positions and a compound in which enemy personnel had gathered after the fight.

This is the attack which, according to the International Committee of the Red Cross (ICRC) "killed dozens of people, including women and children" in an area near the village of Granai in the Bala Baluk district of Farah province, Afghanistan. The same source claims that the deaths arose during fighting between the Afghan National Army, backed up by international military forces, and "armed opposition" which had taken place in the area on 4 May.

The ICRC, however, "was not in a position to know whether armed opposition fighters had been in or near the houses when the air strikes took place, as it had not been on the spot at the time." Thus the spokesman for the organisation said: "We will now try to learn as much as we can about exactly what happened and then raise our concerns in bilateral dialogue with the parties to the conflict."

The New York Times adds detail to the account, telling us that villagers reached by telephone said many were killed by aerial bombing. Muhammad Jan, a farmer, said fighting had broken out in his village, Shiwan, and another, Granai, in the Bala Baluk district. An hour after it stopped, the planes came, he said.

In Granai, he said, women and children had sought shelter in orchards and houses. "Six houses were bombed and destroyed completely, and people in the houses still remain under the rubble, " he said, "and now I am working with other villagers trying to excavate the dead bodies."

One reporter "on the spot" is Patrick Cockburn, writing for The Independent. Actually, though, his dateline is Kabul, more than 400 miles from the scene as the jet flies, or well over 500 miles in a tortuous drive by road. But, at least, he is "there".

Cockburn has his own brand of reality, which does not allow for doubt, thus permitting his newspaper to offer the headline, "'120 die' as US bombs village", with the strap: "Afghan outrage after strike targeting Taleban fighters hits women and children."

"A misdirected US air strike," he writes, "has killed as many as 120 Afghans, including dozens of women and children." The attack, he adds, "is the deadliest such bombing involving civilian casualties so far in the eight years since the US-led invasion of Afghanistan."

Cockburn, however, in contrast with the IRCC and the NYT, tells us that the air strike was on the Tuesday, called in by US Marine Special Forces supporting the Afghan army. He then relies on an account retailed by "local residents" via "Afghan officials". They put their children, women and elderly men in walled compounds in the village of Gerani, which is three miles from the scene of the fighting and where they thought they would be safe. It was these compounds which were then attacked from the air and most of the people sheltering inside were killed. 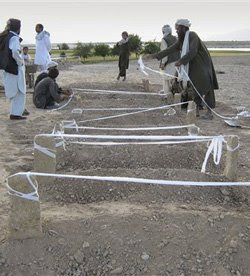 "Dozens of dead bodies were seen in the two locations we went to," says Rohul Amin, the provincial governor of Farah. He told The Independent that "the dead numbered over 100". Villagers brought 30 bodies, including women and children, in a truck to Mr Amin in Farah City to prove it had happened.

As one might expect, The Guardian has its own version of reality. Under a headline, "Afghanistan police operation leaves devastation behind", its man "on the spot", Jon Boone - also in Kabul – has the village named as "Geraani", without putting a date to the incident.

In his account, the villagers of "Geraani" and another in Gangabad had just finished their breakfast when the Taleban came to their town to collect a so-called tax on the area's poppy farmers.

Unfortunately for the people of the lush agricultural area in the western province of Farah, the cavalry arrived two hours later in the form of the Afghan police and army, backed up by US bombs. By seven in the evening, many houses had been turned into piles of rubble out of which the villagers pulled their dead.

Some locals estimate the death toll at up to 200. The Red Cross, the only international observers to have thus far visited the area and reported on what they saw, say "dozens" of people were killed, including many women and children.

Village elder Hajji Issa Khan from Gangabad may be more precise because throughout yesterday his tractor was used to carry the dead to a central area where the villagers could mourn their dead and bury them immediately, in accordance with Islamic custom. "In this operation there were 127 people killed. I can tell you exactly because my driver was carrying those … people to the centre of the town and he came and told me that he carried 127 people."

As to the background, Boone relies on district police chief Haji Khudadade. According to him, a huge number of militants – about 400 – put up a fight and had 130 Afghan forces surrounded. He said the Afghans had no choice but to call in air support, a call that the US military was quick to point out was an Afghan decision taken at the highest level of the military command. The provincial police chief, Ghafar Watandar, then says the Taleban deliberately used the villagers as human shields.

To ring the changes, Jeremy Scahill, writing for the Huffington Post has yet another version of reality. He writes of, "a US bombing massacre that may have killed as many as 130 Afghans, including 13 members of one family." At least six houses were bombed, we are told, and among the dead and wounded are women and children. And the US airstrikes happened on Monday and Tuesday.

The Washington Post, now reporting on an Obama government, has Greg Jaffe, its staff writer in Kabul, writing on yet another version of reality. Jaffe has the top US commander in Afghanistan sending a joint US-Afghan team to investigate the airstrikes "that killed more than two dozen people".

Jaffe also quotes a US defence official, speaking "on the condition of anonymity", saying that "the Taleban went to a concerted effort to make it look like the US airstrikes caused this." The official did not offer evidence to support the claim, and could not say what had caused the deaths.

The BBC, on the other hand, reports protests in the streets in Farah "at the deaths of civilians in US air strikes earlier this week". But it also cites a "Pentagon official" saying it was not clear who was to blame for the death of the civilians. "Initial American investigation shows that some of the deaths do not seem to be in concert with how a civilian would die from an air strike," the official says.

But it also has one protester, Haji Nangyalai, 42, declaring that he was demonstrating to "show our anger at the crimes committed by the American forces". "We ask the Afghan government to force the American forces to leave Afghanistan. They kill more civilians than Taleban," he says.

Associated Press has its reporters, Jason Straziuso and Lara Jakes – datelined Kabul – citing a "former" Afghan government official saying that up to 120 people may have died. If so, the pair observe, it would be the deadliest case of civilian casualties since the 2001 US-led invasion. But it cites top US and NATO commander in Afghanistan, Gen. David McKiern. He is allowed to say: "We have some other information that leads us to distinctly different conclusions about the cause of the civilian casualties."

A senior US defence official then adds that Marine special operations forces believe the Afghan civilians were killed by grenades hurled by Taleban militants, who then loaded some of the bodies into a vehicle and drove them around the village, claiming the dead were victims of an American airstrike.

Afghan police add that 25 Taleban died in the fighting, which began Monday and lasted until early Tuesday. It was unclear whether they were among the dozens of bodies witnessed by the Red Cross.

Then again, we have a different brand of reality from the Wall Street Journal. It cites Col Greg Julian, the main US military spokesman in Kabul. He says that a US-Afghan investigative team was in Farah, with the results of its investigation expected today. "I'm pretty sure the high numbers of casualties are not going to prove true," he says.

Of course, the other reality is that Obama is in talks in Washington with presidents Karzai and Zardari. The Taleban is nothing if not media aware, and skilled at manipulating the Western press.

And, to contrast two of the different realities, while The Guardian tells us of the Taleban coming to their town to collect their so-called tax on the area's poppy farmers, with the "cavalry" arriving two hours later … backed up by US bombs, the WSJ has a completely different version.

According to this source, with writers Yochi J Dreazen and Peter Spiegel in Washington, the disputed airstrike incident began Sunday when Taleban militants publicly beheaded three villagers. When Afghan forces went to investigate, they came under attack and radioed for help to nearby US forces. A US quick-response force went to the area, but was also attacked. The American troops then called in air strikes on locations believed to house the fighters taking part in the hours-long gun battle.

From the look at it, according to this version, the whole affair is compatible with the Taleban having planned a deliberate set-up, to coincide with the Obama talks, deliberately to muddy the waters and create hostile publicity – a classic propaganda coup.

But then, what do we know? We weren't there. But neither were any of the reporters and, from those who were there, we get confusing, conflicting stories of uncertain accuracy (some, possibily deliberately so). In the battle for hearts and minds, though, the truth hardly matters. By the time the "real" reality emerges, no one will believe it anyway. In war, it is the perception that counts. That is the reality.