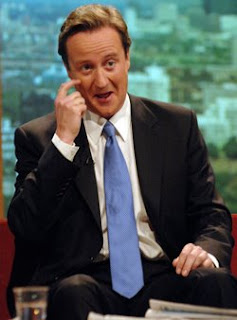 Right on cue, out comes Dave this morning with a shed-load of industrial-grade Elastoplast.

Our political system needs big changes, he says, and then proposes … er … a series of small changes. The whole process of how something becomes law is failing, he says. There are far too many laws being pushed through, with far too little genuine scrutiny from MPs, he says. Excessive "whipping" of MPs by party hierarchies further limits genuine scrutiny. This too has to change, he says.

Dave is absolutely right on one thing, and one thing only. Our political system does need big changes. It is dead easy to lampoon MPs for their bleating over the allowances systems, when they complain that the system is at fault. But they have a point. The system is at fault, and the allowances system – as many commentators have observed – is a symptom of the broader malaise.

If Dave is right – and he is – MPs are not going to function effectively until the system is fixed … effectively.

So why is Dave being allowed to get away with handing out industrial-grade Elastoplast? If Dave is so keen on scrutiny, where is the scrutiny of his lame proposals? Where is the discourse on the political blogosphere? If there was any, I would link to it (such as Devils Kitchen), and broaden out the discussion. But, if it exists, I have not been able to find it.

Alright, we link to our own piece which, inter alia discusses the real flaws in the select committee system, which Dave does not even begin to address. Can anyone else do better?

Or are we supposed to stay transfixed with the theatre and let Dave get away with what amounts to a snow job – passing off the pretence of reform without addressing the substance and the root causes of a failed political system? Are we really all that gullible and so easily pleased? Will nursey really make it better with a magic bandage?