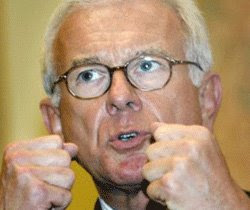 If there was ever a reason for going to war with Germany again, it is that stage Hun Hans-Gert Pöttering, EU parliament president.

He was on his high horse recently, warning anyone who will listen – which is not very many people, as he spoke on Monday – that "extremist parties" could benefit from low turnout in the euro-elections. It was, therefore, up to parliamentarians to increase turnout. "I think it's very worrying if we don't get a good turnout," he said.

Pöttering also had a kindly word for the fourth estate, declaring that it was "not adequate" to concentrate so heavily on national politics. "Almost all questions have something to do with the EU," he stated. Perhaps so. The Daily Telegraph should be doing a session on MEP expenses.

But our stage Hun is at his most adamant when it comes to his own colleagues, saying, "We have to do our upmost to get people to vote because if the people who are in favour of Europe will not vote or are not interested, then the extremes will be very strong, from the very left and from the very right."

He adds, "I don't want that those who want to destroy the EU have an important role to play in the future of the EU. So let us be engaged, let us do our utmost to gather participation in favour of the pro-European parties."

Poul Nyrup Rasmussen also had a go, saying it was "essential to make Europe a political choice". "We're not getting people out to vote … unless they understand that the majority of the European parliament is close to being as important as the national parliaments they know so well," he declared. "I think we should make it crystal clear that you need to go out voting because this majority in the European parliament is of enormous importance."

The only thing is that little Nicky Clegg does not seem to have got the message. Yesterday, according to the BBC, the only thing of substance he could think of as a reason for supporting the project was that, in an unsafe world the EU offered "safety in numbers".

Now there's a message to inspire the troops: "hold on to nanny, children …".