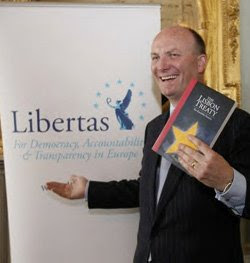 As one would expect Libertas has been making much of the embarrassment that is afflicting our legislators, real and pretend ones. Should Libertas.eu be elected to the Toy European Parliament, they tell us solemnly, they will publish all their expenses on their website, thus ensuring complete transparency. This is part of their "Stamp out Sleaze" campaign that they launched yesterday to little public interest, the latter being entirely focused on details of MPs' spending.

Well, that is very nice, though I can imagine various ingenious ways of making sure that transparent expenses do not mean quite what they say. But there is another problem: Libertas.eu also boasts of the many existing euro- and national politicians they have acquired en route to putting up 550 candidates across Europe. Or as the Former British Soldier, Robin Matthews is supposed to have stated in today's press release:

Six months ago, Libertas didn't exist. Today it is fielding many times more candidates than any other party in Europe.

Since no other party in Europe is quite as much in favour of European integration as Libertas.eu is, that means very little. But what of those politicians who have allegedly joined them?

For instance, every press release tells us proudly in the Notes for Editors that "in Latvia we have a former Prime Minister as the lead candidate". Quite true, the lead candidate for the single region of Latvia, Guntars Krasts, was briefly the Prime Minister from August 1997 to November 1998 (well, maybe not that briefly by Latvian standards) but since 2004 he has been a member of the Toy Parliament. Try as I might, I can find no evidence that he has declared his expenses in detail in the last five years. Perhaps I am looking at the wrong sites.

Another rant on EUReferendum2.

UPDATE: Three press releases this morning (May 14) and they all attack UKIP, particularly the track record of their MEPs. Apparently, they do not turn up for votes, or some of them do not. Curious. Do Libertas really think that they can take votes away from UKIP, having made it quite clear that they are a "pro-european party"? Why not go for the Conservatives, whose ideas are not dissimilar? And what of those sitting MEPs who are intending to stand under the Libertas name? What of their voting record? Of course, there aren't any in Britain.