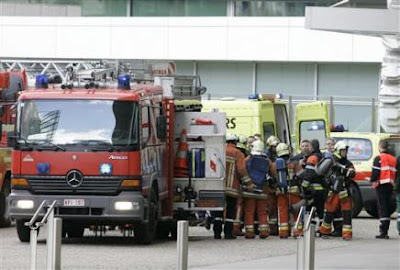 It wasn't us. Honest. The boss is in his home ooop north (I have just spoken to him) and I am ensconced in West London. So we are not responsible for the fire that, according to EurActiv, has paralyzed "EU executive". Well, of course, the Commission is the Legislative as well as the Executive and the guardian of the constitution, a.k.a. the Treaties, but this is no time to split hairs.

The European Commission's historic Berlaymont headquarters, which houses the 27 European commissioners, was evacuated today (18 May) at about 13:20 Brussels time after a fire had broken out. Commission officials who witnessed the evacuation told EurActiv that they had first smelt the fire 20 minutes before they were asked to leave the building.

The evacuation was very orderly, we are told, because Commission officials are used to running away fire drills.

Where did the fire start? EurActiv talks wildly of several locations but the BBC is more specific. It was apparently the Press Room, known as the bunker.

Journalists working in the press room, known as "the bunker", said they had noticed a steady build-up of smoke for 20 minutes before then, but that the smoke detectors had failed to react.

"There was a lot of smoke. The internal security and fire marshals were running around, trying to find the source of the fire. It smelled horrible and wasn't like a gas smell," said Darren Ennis of the Reuters news agency.

"I could see the smoke in the corridors, and about 20 minutes later people were told verbally to leave the building. But there was no fire alarm. After we left, I saw Commission President [Jose Manuel] Barroso leave."

"A Commission spokesperson said the fire probably started in the basement. There's lots of printing, paper and store rooms down there. The smoke would have gone up the ventilation system to the roof," he added.

Not to mention the noxious hot air emitted by the hacks. No wonder the smoke detectors failed to react.

(Pic: Belgian firepersons discussing whether to put the fire out, or let the building burn.)