Are we being taken for fools? 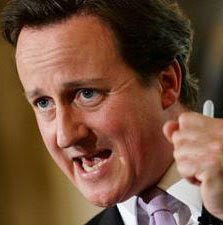 Quite understandably, Tory Diary gives an upbeat account of the Elastoplast King's input to the "great constitutional debate" that is beginning to emerge – one positive side-effect of the Telegraph's relentless pursuit of errant MPs. However, some of the negativity for which this blog is famed and detested in equal measure is found in the comments section.

We ourselves take the view that, in response to Mr Cameron's soaring rhetoric, people are entitled to be suspicious and, after ten years of Blair, even cynical. Any politician needs to recognise that, and should not be surprised if their rhetoric is treated with a certain amount of reserve.

Not least, when Mr Cameron tells us: "I believe the central objective of the new politics we need should be a massive, sweeping, radical redistribution of power ... from the EU to Britain ...", we need to be conscious of the fact that, in order to deliver on this – should it ever become a firm commitment rather than rhetoric – the government would have to abrogate the EU treaties and, effectively, leave the EU.

This would be a highly desirable outcome and it may be what Mr Cameron has in mind. The problem one has with this, however, it that nothing he has said previously has ever suggested that this is his aim, or that he has any intention seriously to engage with the EU with a view to securing a "massive, sweeping, radical redistribution of power." In the context, we would assert that suspicion is an entirely sensible response.

However, in his speech today in Milton Keynes, expanding on the Guardian piece, we see what appears to be a startling and, on the face of it, an unequivocal commitment:

In respect of the Lisbon treaty referendum, there are no qualifications and if we can take the words to mean what they appear to mean – not always wise when politicians are speaking – then EU Referendum is back in business. Such as been the prevarication of Tory Party spokesmen, though, that we will need clarification of this before we get too excited. But, if the contents match the label on the tin, UKIP is dead in the water.

Once again though, the worm of doubt insinuates its way into the core. Cameron's original assertion was: "I believe the central objective of the new politics we need should be a massive, sweeping, radical redistribution of power ... from the EU to Britain ...". His new text reads that we (a Conservative government) will "negotiate the return of powers".

It is not unduly cynical to note that there is a huge difference between the two texts, the former being genuinely new while the latter is merely a re-statement of Tory policy, one which we know to have very limited objectives.

Given the care with which Mr Cameron's speeches are drafted, the words used cannot be dismissed as mere loose phrasing. We are entitled to infer from what he says that he means precisely what he says. Any analytical reading of his second text suggests that he has not said very much at all, and that it is entirely at odds with his first text.

Then, of course, there is the vexed question of "negotiation". This has been a vague aspiration in Tory policy for more than 20 years and, each time it has been put, we have asked – in the spirit of genuine inquiry - "… and what if they [the colleagues] say no?". To that, we have never had a satisfactory response, the issue usually being fudged with references to the Thatcher "handbag" strategy.

Thus, while more than happy and willing to be convinced of Mr Cameron's good intentions, textual analysis suggests that we have a way to go before we can accept that what we are being told is anything more than the "same old, same old" tired political rhetoric.

Elsewhere, we have remarked that, whatever else, Cameron is not stupid. He – and those around him – must know that much of the disillusionment with politicians stems from their tendency to offer high-flown rhetoric and then fall short on delivery. Ten years of Blair has hardened us to that.

Therefore, Cameron must also know that we are not going to be satisfied with mere rhetoric. Over the years, politicians have used up any trust and we are not in the mood to give them the benefit of the doubt. Certainly, Peter Hitchin is not in a forgiving mood. In an updated version of an article published last week, he writes:

I've also begun to notice that Mr Cameron now makes much of the fact that Parliament has lost much of its power to "Europe" and the Judges. He speaks as if he plans to correct this. But he knows perfectly well that unless Britain leaves the EU, most of our legislation will be imposed on us by the European Commission. So this seems to me to be just talk.

A small digression here. Vikki Boynton posted last week that the Tory position on Lisbon is: "If the Lisbon Treaty is not yet in force at the time of the next general election, and a Conservative Government is elected, we would put the Treaty to a referendum of the British people, recommending a 'no' vote. If the British people rejected the Treaty, we would withdraw Britain's ratification of it." Seems clear.‘

Yes, it does "seem" clear. It is meant to seem clear. But it is not. A British withdrawal of ratification would be followed by immense pressure from the EU to change that position. There is a great appetite in Brussels to get on with ratification. How would a Cameron government respond to that pressure? I believe it would "negotiate" a "compromise" that would end with Lisbon coming into force more or less as it is. That is the key question, and one you won't get an answer to. Only a government which clearly wished to leave the EU could possibly escape from this bind.

Cameron's performance today raises more questions than answers. But he should realise that he, with the rest of the political classes, is in "Last Chance Saloon". Iain Dale believes that, "What Cameron has done is provide leadership - again - in a way which leaves the other parties trailing in his wake." If he is not and merely playing rhetorical games, taking us for fools, vengeance will be swift and complete. For his sake, I hope he knows what he is doing.