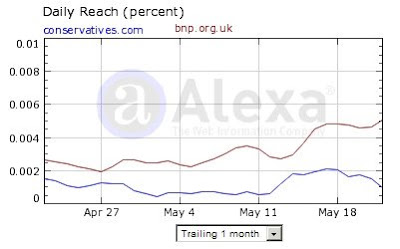 Where one would like to see the blogosphere leading the charge, dominating the political debate as it is doing in the United States, the heart sinks when we see the desperately trivial contribution to the "great constitutional debate" made by Tory Diary.

Oblivious to the discussions going on around him, Tim Montgomerie suggests only what amount to marginal changes, failing to address the fundamental failures in the system, arguing for such things as a five percent annual reduction in taxpayer funding of political parties until it is completely eliminated. Even his one substantive point, "A renegotiation of our relationship with Europe that will see key powers returned to Westminster" is weak, building on the Conservative myth that renegotiation is in fact a possibility.

Elsewhere, in the much-derided MSM, we get two intelligent contributions. One is from Adrian Hamilton in The Independent on reform of the Select Committee system. The other is from David Green, director of Civitas, in The Daily Telegraph.

Green offers "a radical solution would be to ensure the complete separation of powers by emulating countries such as Germany, France and the US, where government ministers are forbidden to serve in the elected assembly."

As for Hamilton, he argues that most select committees are led by placemen, made up of the mediocre and tasked with the irrelevant. He is worried that calls for reform are directed at the wrong problem. The aim, according to the reformers, he says, is to enable parliament better to hold the executive to account. Yet is setting up Commons Committees as attack dogs on the government really their most useful function, he asks. Hamilton thus continues:

If the problem were an overweening central government out of control, as the reformers suggest, that might be so. But the problem of government in Britain is not really an untrammelled executive, for all the size of recent parliamentary majorities. It is that policy making and legislation is so poor.

The failures of health and education policy, the negligence of financial regulation, the mistakes of military procurement, the lack of North Sea depletion policy or a balanced energy strategy, the perversion of Public-Private Finance Initiatives, the timidity of the transport approach, the tardiness of environmental measures – all these arise not from an over-strong executive, but a political system that has been unwilling or unable to work through and discuss alternative approaches to central issues.

Select committees ought to fulfil this function.

That is a good point, arguing for a more proactive involvement by committees. Riding a populist bandwagon after the event is not fulfilling any special public duty, says Hamilton, echoing our argument on defence procurement, where the committee should be involved before a purchasing decision is made. It should not be left merely to comment on the failures, some time after the event, when money had been wasted and men have died.

Arguably, these two issue of "separation of powers" and reform of the select committee system are amongst the most important we need to address. But they seem to have passed the political blogosphere by, and are sadly absent from Montgomerie's offerings.

Some long time ago, we reviewed a report on the political blogsophere, and not much seems to have changed since. The commentary is still largely lightweight and derivative, and the MSM is still making the running. The blogosphere needs to up its game.

Nor is this an academic issue. Despite the "right" preening itself on dominating the blogosphere, the BNP – as the above graphic shows – is still the lead political website by a long chalk. And yesterday, we saw another by-election success for the BNP, where it took 19 percent of the vote in Middlesborough's North Ormesby & Brambles Farm ward, coming second after Labour and relegating the Conservatives to third place.

Unless we as a collective are able to offer better, real improvements to the system, the BNP will win the argument by default. Either we fill the vacuum or they do.