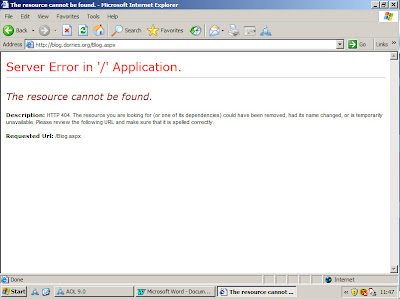 There is much fluttering in the dovecotes about a report that Nadine Dorries's blog has been closed down after intervention by The Daily Telegraph's lawyers - the closure of which was picked up by Tony Sharp last night, and picked up by Tory Diary (see also the comments).

Variously described as a "silly woman" and much worse – not without some considerable justification – the focus has been on Dorries's charge that the Telegraph has engineered the current furore over the ACA simply to discredit the mainstream political parties and thus favour the minor, more eurosceptic parties in the run-up to the euro-elections.

To describe such a charge as "fanciful" is perhaps to do it more justice than it deserves, but what seems to be missing from any of the discourse is Dorries's other substantive complaint.

This was that, not only was the Additional Costs Allowance - with the stress on "allowance" - regarded as a salary increment (and thus an entitlement) but that most journalists in the Westminster loop knew that to be the case. Thus, she complains that the media is misrepresenting the ACA as "expenses" when they know them not to be, and have known for a considerable time.

That successive governments since 1971 have resorted to disguised payments, to avoid having to declare overt (and contentious) pay rises (and that they have been made tax-exempt), and that MPs and the media both have colluded in this process, is a significant story - but it is of a completely different order from the way it is currently framed as "expenses abuse" - which it is not.

There are three parties to this issue - successive governments, starting with the Heath government, MPs and the media.

One wonders, therefore, what the real agenda is behind this flood of iconoclastic stories focused exclusively on MPs. These are essentially destructive in nature and serve - unwittingly perhaps (or not) - to weaken the authority of parliament as an institution and thereby strengthen the executive.

One wonders, also, whether the speed with which Dorries's blog has apparently been closed down relates more to this substantive complaint, than it does the others. A "backlash", based on an appreciation that the Telegraph campaign is based on a deliberate misrepresentation of the position, would be dangerous to the paper and raise questions which some would prefer not to answer.

Either way, the allegation that a blog has been closed down – even one by Nadine Dorries – by a newspaper which apparently champions free speech is a very serious issue.

The newspaper – in common with some others – has a reputation for censoring readers' comments on its online news pieces. Far too many people have complained that there is a distinct bias - in that comments which oppose the newspaper's line simply do not get published – for this to be considered accidental.

Taking down a blog – if the allegation is correct – brings a whole new dimension to this activity, and has very sinister implications.

UPDATE: It is understood that the Barclay brothers are planning to sue Dorries for libel over her remarks in respect of their motivation and involvement in their paper's campaign. Interestingly, the BBC could be in trouble, having repeated the alleged libel.