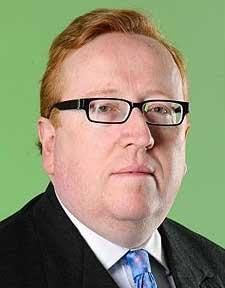 It is rather entertaining, at one level, to see Simon Heffer declare an intention to take on Sir Alan Haselhurst at the polls, protesting at the use of his allowances to pay for £12,000-worth of gardening at his country house.

Heffer, we are told, "joins the growing ranks of public figures who have come forward offering to unseat MPs seen to have abused the system". These include Esther Rantzen, the broadcaster and campaigner. She is to stand against Margaret Moran in Luton South unless the Labour MP resigns over her expenses, including £22,500-worth of dry rot treatment at a house 100 miles from her constituency.

Robert Harris, the writer, said he had considered challenging Alan Duncan, the shadow Leader of the House – another gardening enthusiast – and Lynn Faulds Wood, the television consumer campaigner, is also prepared to have a go. Then we have David Van Day, the former Dollar singer, who says he is planning to oppose Nadine Dorries.

Another one who is feeding on this "anti-politician mood" is Mr David Cameron. He has stated an intention to re-open the Conservative Party candidate list, accepting applications from all-comers, even if they are not members of his party.

Added to all that is the non-party party, the Jury team which wants to field a bunch of amateurs who want us to vote for "democracy, accountability and transparency" – without giving any indication that they understand even the basic nature of the systems they wish to enter.

Looking at these developments in the round, the idea of having Heffer in parliament is indeed entertaining, and he would probably make quite a good MP within the current system. There is a long history of journalists becoming MPs and vice versa, although – as in Julie Kirkbride - the transition is not always successful.

Taken to the extreme, one can even entertain the idea of the country returning a complete deck of 646 "amateur" MPs, stripping out all of the incumbents and starting with a completely clean slate. That, of course, will not happen – but that still leaves the possibility of there being a significant number of amateurs in the next parliament.

Whether we would be better served is another question. Arguably, compared with the ghastly Esther Rantzen, even Margaret Moran and her £22,500-worth of dry rot treatment might seem attractive.

More specifically, while the sentiment is very much against career politicians, in an age when even dustmen call themselves "professionals", one would hope to have professional MPs in parliament – the term signifying that they do at least know what they are doing.

Here, there seems a certain element of confusion as to what MPs actually do – something we have often asked. But the best are very busy indeed, and work extremely hard. They tend to be those who rarely get the high-profile media treatment, not least because they are too busy to indulge in the sort of relentless self-promotion that gets MPs noticed.

And, where the MP attempts to do the job properly – within the constraints of a system that is designed to prevent them from so doing – the work is highly skilled, requires a great deal of aptitude, knowledge, experience and sheer, grinding hard work, leavened with prolonged bouts of frustration, tedium and fatigue. For all the visible glitz and glamour, it is a dreadful job if you do try to do it properly, and is most certainly not one I would enjoy (or even be good at).

Crucially though, the dominant experience is that of frustration. MPs are constantly up against the brick wall of a system that has robbed parliament of its powers and is unresponsive to the needs of a democratic society.

One has to ask, therefore, that if the "professionals" find being an MP such hard going – and find it so difficult to achieve anything – why it is people think that rank amateurs would be any better?

For sure, true "independents" free from party allegiances – if there were enough of them – might force through changes to the system. But that presupposes that they knew enough about the system to know what is wrong with it and what changes were needed. Then they would have to know enough about the procedures to be able to implement their changes, without the "pros" running rings round them and blocking their every move.

Then – ironically – in order to have any effect – the "independents" would have to organise themselves, agree a common line and tactics and then co-ordinate their actions to make sure their agendas prevailed. And hey! We have another political party.

As it is, a bunch of amateurs abroad in the cockpit of parliament would actually strengthen the incumbents. All at sea, without the party machinery to support, inform and co-ordinate them, the newbies would be taken to the cleaners by the established parties. Like as not, those newbies would find out very quickly what every MP already knows – that, as individuals, they are essentially powerless.

As for Mr Cameron and his call for amateur-hour, any party leader would welcome a bunch of novices at his beck and call – ignorant, confused, fearful and compliant, they would be easily malleable and, for a very long time, lambs to the slaughter. Even great egos like Ken Livingston were sucked in, chewed up and spat out, without making their mark.

All that points to the singular and inescapable fact – that the problem is not primarily the MPs, but the system in which they operate. Even the very best are frustrated by it, and new faces – while providing novelty and entertainment – are unlikely to do any better than the current bunch. Many would do far worse.

Therefore, the vital need is to change the system with a view to enabling our parliament to function more effectively. That change is unlikely to come from within parliament itself. This putative citizens revolt, therefore, is probably a dead-end street. Politicians – amateur or not – cannot fix the system on their own. We "the people" are going to have to force the pace.