It's snowing all over the world 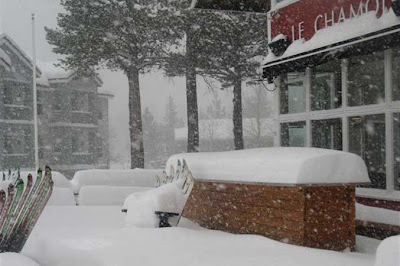 Ice in the Arctic is often twice as thick as expected, report surprised scientists who returned last week from a major scientific expedition. The scientists - a 20-member contingent from Canada, the U.S., Germany, and Italy - spent one month exploring the North Pole as well as never-before measured regions of the Arctic.

Among their findings: Rather than finding newly formed ice to be two metres thick, "we measured ice thickness up to four metres," stated a spokesperson for the Alfred Wegener Institute for Polar and Marine Research of the Helmholtz Association, Germany's largest scientific organisation.

Then we get this from the United States: "Sorry, Al Gore, but Public Cares About the Economy, Not Global Warming".

Gallup Poll Editor Frank Newport says he sees no evidence that Al Gore's campaign against global warming is winning. "It's just not caught on," says Newport. "They have failed." Or, more bluntly: "Any measure that we look at shows Al Gore's losing at the moment. The public is just not that concerned." What the public is worried about: the economy.

He adds: "As Al Gore I think would say, the greatest challenge facing humanity . . . has failed to show up in our data."

On the British front, we get reported by The Daily Mail, "Ed Miliband's global warming law 'could cost £20,000 per family'", with a report stating: "Laws aimed at tackling global warming could cost every family in Britain a staggering £20,000 - double the original forecast."

This follows the Met Office forecast for a "warmer than average summer". It has been cold and wet ever since that report – we even had the central heating on here. And skiinfo.com reports, "It's snowing all over the world", even telling us: "Last week of winter in France, but it's still snowing", with the southern hemisphere ski season starting five weeks early.

Sooner or later, even our loathsome media are going to put two and two together. Then, those idiot politicians who have embraced the global warming scam are going to look even more stupid than they do already. The reckoning may be delayed, but it will come.