The only way out is out 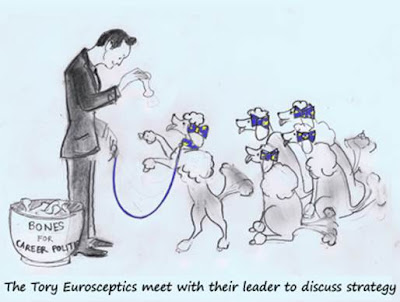 As the little Tory muppets struggle with the idea that the Great Leader has sold the pass on "Europe", up pops MP Mark Pritchard to tell us that the Coalition should agree to a referendum on Europe. Reaching down to the great unwashed, the High and the Mighty should graciously ask us mere plebs whether Britain should be "part of a political union or of the trade-only relationship we thought we had signed up to".

"The referendum", he then says, "should be held next year, and a successful 'No to political union' result would immediately strengthen the Prime Minister's negotiating hand in Brussels to commence serious and meaningful negotiations with our partners on Britain's new relationship".

So let's get this right. Pritchard is not exactly suggesting we leave the EU ... simply that we should have a jolly little referendum to keep the plebs happy, and then Dave can have a jolly little chat with those chaps in Brussels about throwing us some bones. In other words, we're talking about exactly the "same old, same old", that Booker, I and so many others have already kicked into touch.

Yet, how easily pleased are so many of the trusting little souls, to judge from some of the comments. Raedwald calls it a specious distraction. Dead dog bounce, on the other hand, regards it as a childish trick. They are both dead right.

This is just typical Tory smoke and mirrors, from incontinent MPs terrified of losing votes over Dave's decision to refuse us a real referendum. Pritchard and his little pals still cannot bring themselves to the point where they confront the reality. But there is no halfway house. You are either in, or you are out. And the only way out is out.

COMMENT: "HOLED BELOW THE WATERLINE" THREAD
Posted by Richard at 08:43