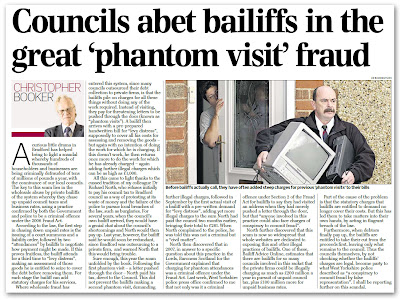 This is the other half of the Council Tax scam, which Booker now reports in his column (above - click to expand). I can now reveal that it was he who approached West Yorkshire Police (WYP) and got from them the formal statement that the so-called "phantom visits" were fraud, contrary to Section 2 of the Fraud Act 2006.

Despite this welcome development, however, the message has not got to the plod at street level. Their line – we now discover - is that, because no money changed hands, my particular case is a "civil matter". The logic of this is, to say the very least, bizarre. By their reckoning, an attempt to defraud is none of their business – I have to give the fraudsters some money before they will treat it as a crime.

This stance seems even more bizarre when one is aware that S.2 states that a person is in breach of this section "if he dishonestly makes a false representation, and intends, by making the representation to make a gain for himself or another, or to cause loss to another or to expose another to a risk of loss". There is nothing there at all about money changing hands.

Faced with this WYP stupidity, however, I had already written to the Chief Constable, when I received a call from his office telling me that the sergeant from the neighbourhood police team would be calling on me.

Needless to say, that visit did not transpire. Instead, I got a visit from two uniformed plodettes, who did not have the first idea of what they were calling for, but merely had been sent by their sergeant to find out what I wanted. They listened, without taking any notes, much less a statement or looking at any of the documentation, and departed. Since then, I have heard nothing, and wearily, another letter has gone off to the Chief Constable's office.

My impression now is that the press office is trying to row back, but with this week's Booker column, the cat is now out of the bag. And maybe now, the local paper – which has so far been sitting on the fence – may stir itself and do a story. It would be too much of a miracle, however, for the plod to act.