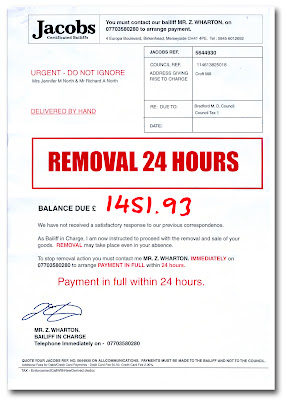 Most years, the EU Referendum household has undergone a not unpleasant little ritual when the Council bailiff calls to collect the Council Tax. As a matter of principle, I refuse to pay the tax until forced to, so he has called every year to collect the money.

This is something of a futile gesture but then, if none of us indulged in such gestures, politicians would never get elected. We would all stay at home instead of voting.

Up to press, it has been the same bailiff each year. He is a gentleman in the old fashioned sense of the word. We invite him in, he sits down and we have a chat while I write out the cheque, he writes out a receipt and he goes on his way. Honour is satisfied.

Strangely, although I end up paying the statutory bailiff's charges and court fees, the total sum last year worked out at less than the original sum demanded by the Council, so it was not altogether a futile gesture.

It was last year, however, that the bailiff informed me that he was to be made redundant. The Council were to engage a private firm to collect its money. My bailiff warned darkly that this would cause no end of trouble. And how right he was.

This year, repeating the normal ritual, I refused to pay my Council Tax. The routine summons arrived – dated 12 May for a court appearance on 1 June, adding a £55 fee to the bill to bring it to £1,190.33 (pictured below right). The fee itself is a con. There is no hearing – the "judgement" is carried out by computer and the Magistrates, as so often, just rubber stamp the process … in bulk, and then add further fees.

Anyhow, there the matter rested until 12 July, when we had stuffed through the letter box a missive from Jacobs Certified Bailiffs, demanding not £1,190.33 but £1,239.83, or my goods would be seized – a process known as "distress”. The letter claims the bailiff was in "attendance", which was a lie – the first of many. We were in the house as the letter came through the door. There was no knock, and no attempt to speak to us.

Therein lies the second lie. Scale fees apply – by statute. For actually making a visit to premises with a view to levying distress (where no levy is made), they can charge £24.50. For a second such visit, the maximum charge is £18.00. Thus, our man is breaking the law, charging for delivering a letter, which he is not entitled to do. This is known variously as theft and fraud.

It gets better. The next letter is popped through the letter box the next day, the bill goes up by £18 to £1,257.83. This again is the statutory fee – although it is fraudulently charged. No visit has been made. He has just delivered a letter.

Despite the threat of 24-hour action though, the next letter does not appear until 27 July – by post. It threatens action within seven days. The sum remains at £1,257.83 but the letter warns that, should goods be seized, "it is unlikely that further costs will be less than £110".

This may or may not be legitimate, as bailiffs are permitted to recover their expenses – although not exceeding 15 percent of the sum realised. However, what the bailiffs clearly do not realise is that by now the Council Tax has been paid in full, direct to the Council, the sum appearing on my bank statement on 15 July. Although court "fees" have been levied, no money is due – the payment was made and accepted in "full and final settlement". 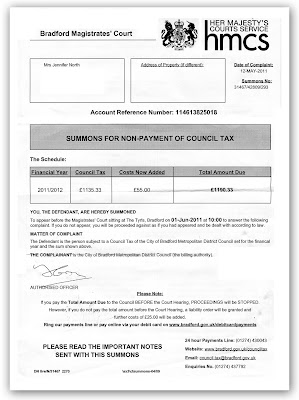 Now it gets really good. On 7 September, we get a stranger, claiming to be a bailiff, knocking at the door, wanting to discuss our "Council Tax". He shows no ID, does not identify himself, and gives no name or company. I suggest he goes away and checks his records. When he persists in attempting a discussion, I make certain suggestions that are anatomically impossible and close (actually slam) the door.

Nevertheless, the stranger has not given up. He stuffs a letter through the door, with the sum demanded, filled in red marker pen, having reached £1,451.33 – a total addition of £261.00 to the original summons, and nearly £200 more than the maximum charges which a bailiff could legally make, had the maximum of two visits actually been made.

In this letter, we are also informed that the bailiff intends to re-attend the premises and remove my goods, even in my absence, unless payment is made in 48 hours.

Nor has it stopped. Yesterday, 24 hours ago, we got another missive thrust through the letter box (pictured), threatening action in 24 hours. The sum demanded, inexplicably, has gone up to £1,451.93. But, so far, there has been no attempt to collect this money, and we await further developments with interest.

To date, the maximum – with one visit – the bailiff could legally have charged was £24.50 (except that by the time he made the visit, the tax had been paid). They have actually charged £236.60 and have then sought, by deception and with menaces, to obtain this money - to which they are not entitled. This, without equivocation, is unlawful. 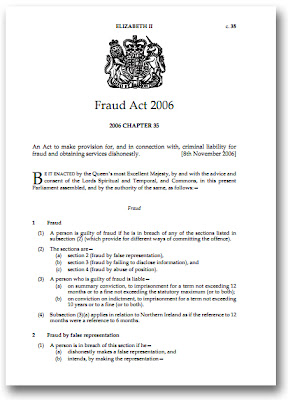 Rather than the Theft Act, Section 4 of the Fraud Act 2006 would seem to apply: "fraud by abuse of position". It is interesting here that a person may be regarded as having abused his position even though his conduct consisted of an omission rather than an act. This means that local authority officials could be implicated, as they permit and then condone this action. Failing that, Section 2 most certainly applies.

However, the clever thing about what is obviously a rehearsed and considered fraud is that, superficially, it looks legal. The scam is to charge the maximum that appears to be allowed, as if distress had actually been levied and goods seized - without actually incurring any of the costs or going through the legal procedures.

Furthermore, this is standard practice, and nationwide. Look to the forums on these issues and you will see an endless number of cases where people have been unlawfully overcharged by bailiffs. The modus operandi is invariably the same – the sums are filled in by hand in a blank space conveniently left on the forms, with no verifiable dates. There are no copies, no records of the actions actually taken. The local men charge what they think they can get away with, but always apparently within the law. And most people are too scared (or ashamed) to argue, can't afford lawyers and don't have blogs and clever forum members.

For them (and me), though, there is no point in calling the police. Last time I did that, when the "bailiffs" unlawfully took (i.e., stole) my car (despite their warrant specifically excluding the taking of motor cars), the police intervened to let them do it - without even asking to see the warrant. They assaulted me, arrested and handcuffed me and then locked me up. When I later went to the local police station to make a formal complaint, the superintendent on duty told me to "piss off". Is it any wonder I have a down on the police?

More recently, a friend and colleague had a bailiff calling to collect a £60 parking penalty, charging £300 in fees, against a threat to clamp his car. This also is fraud. Despite a complaint to them, the police have done nothing.

These bailiffs are the scum of the scum. Worst still, the authorities know the abuse goes on and permit it. They benefit from it. Their high-flown notions of justice, their smart courts, their airs and graces, their claims of equity and justice all boil down to them using licensed thugs to extort the money. They are no better than the thieves they lock up.

I can look after myself on this one, and these scum have not heard the last of this. But these are the scum who prey on the weakest and most vulnerable in our society, stealing in broad daylight with the permission and complicity of the authorities – my local council included.