The thrashings of the dinosaurs 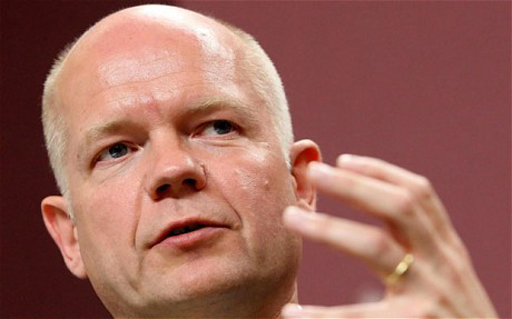 There is one thing very comforting about William Hague – as a politician he totally confirms one's prejudices about the breed. When he opens his mouth, he is lying. And by act or deed, even when his mouth isn't open, he is still lying.

However, it is by a combination of mouth and deed – through organ of the Failygraph - that we see a continuation of the "Europe lie", where the ghastly little man seeks to persuade his gullible followers that there is a half-way house between quitting the EU and being sucked into its maw.

That, then is the lie – currently articulated by Hague in the form of the claim that "Britain could benefit by loosening its ties with Europe". To that he adds that he welcomes the "debate" on the issue provoked by "increasingly vocal Conservative backbench MPs".

In that, of course, nestles the other lie, that there is a "debate" and that its progenitors are the "increasingly vocal Conservative backbench MPs". This is the Myrtle tendency apparently led by George Eustice, and the "debate" is simply a transparent and rather ugly attempt to create an artificial centre ground to be occupied by "moderate eurosceptics".

Things have gone too far for any but the feeble minds of the Tory faithful and the Telegraph commentariat to believe it, but this does not stop the Eustice-Cameron-Hague axis rehashing the old ploy. They have to, because that is the only way they have of supporting their rampant europhilia. The pressure is now on to neutralise any murmurings of true eurosceptic sentiment in time for the "Leader's speech" at the party conference.

The faux debate will also keep the mindless hacks happy, and their attention diverted from the real issues. These are the impending collapse of the European Union and how the UK will adjust to the new reality, things which the ancien régime is incapable of understanding.

There, it strikes me, we have made some progress. Although the dinosaurs still hanker after further European integration, this no longer carries with it the aura of historical inevitability, while the possibility of collapse is now treated seriously.

This explains the desperate attempt to create a new middle ground, but it also underlines the essentially conservative (with a small "c") nature of political parties. They are the defenders of the status quo, not the forgers of new directions.

No political party will ever lead us out of the EU. Whichever one is in office at the time will simply follow public sentiment, when the overwhelming balance of utility has shifted against membership, and the political classes can no longer sustain their position. Our "leaders" are not leaders at all. They are followers from the front, who have somehow learnt the trick of convincing people that they are in control.

To that extent, despite our natural pessimism, we are actually winning the battle of hearts and minds – we are successfully lodging in the public mind that the EU is a failing entity. The posturing of the Myrtle tendency is good evidence of that, and the more they thrash around, the more absurd they look.