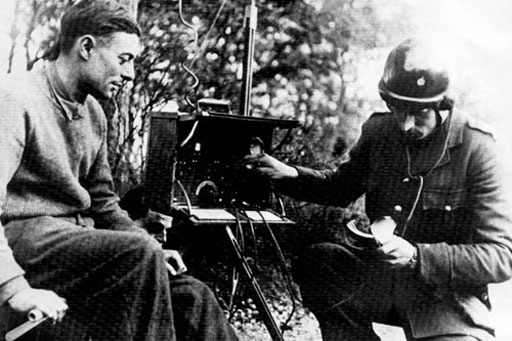 I really did watch a commentator on BBC News 24 say that the economic crisis would not be resolved until at least six countries left the eurozone, and we stopped throwing good money after bad. I know he said it – even though I missed his name – because there were witnesses in the room. They saw it as well.

Needless to say, economics and business in the BBC is now dealt with by a girlie (of the male variety) – who did not bat an eyelid and went straight on with the next question. The answer cannot have been in his script, so he had not been programmed with a response.

Something similar is happening with van Thingy who has been programmed to have another bash at being Führer. This time, though, he wants to head a "United States of Europe", complete with its own "economic governance", so that it can pump what's left of its dwindling resources into rescuing the ailing currency.

This really is redolent of the last days of the Third Reich, when all Hitler could marshal to stem the advance of the massed armies of the Allies were five broken-down tank destroyers in a camp at Senne which, he was told, could only be put into battle "in the next few days".

But then, as Mary Ellen Synon points out, from deep within the eurobunker in Brussels, the only answer to each and every crisis is "more Europe". And, as the crisis on the British front deepens, the message and the language get more frenetic.

Back on this periphery of the decaying empire, we also see the incomprehension, as the Quisling forces retreat in disarray over the agency workers directive, with not the first idea of how to handle their own crisis, now that the centre is falling apart and the eurobunker is shutting down.

After all these years of wanting to be "in Europe but not ruled by Europe", the Quislings are finding that they need Brussels to rule, because they have lost the capacity to make their own decisions ... and so far have the organs of state been eroded that they are having to call out to the local takeaway for their legal advice.

So it is that we are just beginning to see the glimmerings of chickens coming home to roost, as Autonomous Mind discerns, the europlastics don't have the first idea of how to go about leaving the EU. They lack any coherent strategy, even while they drag their acolytes into the Tory net and pretend they were agin the EU all along.

This is more like the scene in Paris after liberation, when every Frenchman suddenly discovered that he too had been a member of the Résistance - in secret, of course, m'sieur - and had been fighting the Germans right through the occupation.

Neither can the born-again Résistants draw any succour from their Uncle Tom "eurosceptic" organisation, Open Europe. Although, as Mary Ellen Synon again points out, they are doing wonderful work around the edges, they still can't get their mighty intellects round the simple fact that the EU can't be reformed. The only way out is out, so to speak.

Thus it is that we are beginning to look to the scenario that we have predicted for some time where, as the EU collapses around us, the UK will be the last fully paid-up member. As the hoards gather on the outskirts, the mandarins will be diligently reporting to the eurobunker in Brussels, where van Thingy will be polishing up his cyanide pills and shooting his dog, while the chauffeur is out looking for cans of petrol.

Meanwhile, faint messages from the EU Referendum blog, transmitted over illicit shortwave radio, are telling the Whitehall bunker that the war is nearly over and that they had better plan for peace. Despite its call-sign "Reality Calling", though, no one was there to hear the message. The troops, as has long been suspected, are all out to lunch.