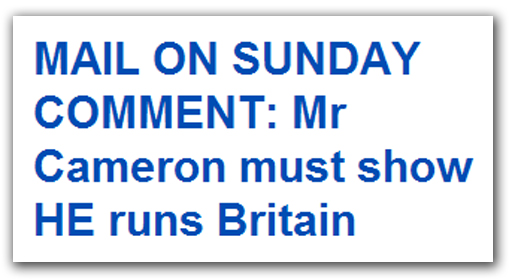 Cameron calls himself a prime minister. He is in fact the head of the administration of a province of the European Union, with limited and in many respects subordinate powers. What little power he exercises is filtered through his own office, tempered by his coalition "partners" and his own cabinet and administrative colleagues.

He is then reliant on an array of public officials and many others to carry out such instructions as might reach them, bearing in mind that most departments of state, local authorities, and other tax-funded organisations are largely autonomous and run their own affairs on a day-to-day basis.

Outside that framework is the greater part of Britain – its people, and their private enterprise. Cameron has extremely limited control over them and their enterprises and, in a huge number of areas, he had absolutely no control at all. Even in the state sector, he cannot even fully control British police forces, and nor would we want him to.

To suggest that he "runs Britain", therefore, is absurd. Such a suggestion does not even serve as a lose, journalistic approximation. It is a silly, crude, babyish idea that represents a distorted view of the world in which we live.