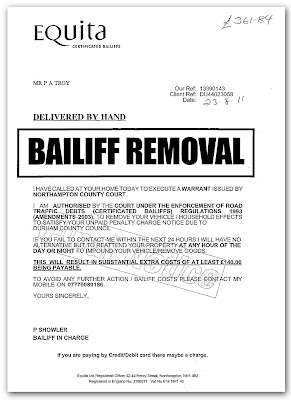 If not exactly the stuff of nightmares, it certainly gave a considerable jolt. There he was at home relaxing. There is a loud knock on the front door and he gets up to investigate. But there is no one at the door. Instead, stuffed in the door is an envelope, its contents a printed note from Equita Certificated Bailiffs (pictured right).

In large bold print, it states "Bailiff Removal" and in blue ink on the top right hand corner is written £361.84. The note states: "If you fail to contact me within the next 24 hours I will have no alternative but to re-attend your premises at any hour of the day or night".

This was on 23 August, the unhappy recipient Peter Troy, who then calls the bailiff on the mobile number supplied. The man, Paul Showler, confirms he is demanding £361.84 in cash and says that he will return in two days time. If Peter does not then pay the money, he says he will clamp his car.

All this is in respect of a £60 unpaid parking fine imposed by Durham County Council, the fees for which had escalated the "debt" to £95.44 by 11 July. Now, on the first "visit" from a bailiff, they had supposedly reached the astronomical level of £361.84.

Undaunted by this impost, Peter does several things, one of which is to contact the Northampton Bulk Centre, which issued the warrant, to get it set-aside and to arrange a hearing in the local courts. Through this means, the action is suspended. 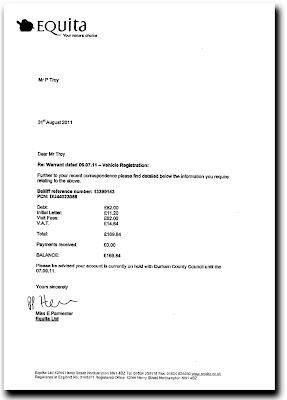 Then Peter gets in touch with Equita, innocently asking how much he actually owes. He receives a letter dated 31 August (pictured left, click to expand), telling him that the sum due is in fact £169.84 – an amount that is in any event excessive.

Crucially though, in demanding £361.84, Showler has added £192.00 on his own account, the handwritten addition to the note having no corresponding record in the bailiff's office. On the face if it, our Mr Showler is doing a bit of free-lance pocket lining.

It gets better though. In order to execute court warrants, bailiffs must be what is known as "certified". Helpfully, there is now an online register and we looked up Mr Showler. Interestingly, he is entered as a Certificated Bailiff at Middlesbrough County Court, but on behalf of a company called Corporate Transport Solutions.

Now, this company was dissolved on 18 January 2011 and is no longer trading. The certification is not transferable. In order to practice, therefore, Showler should have applied for a certificate in the name of his current employer. Thus, in jargon terms, he is not "compliant with the law" and he should not be acting as a bailiff.

Since then, a formal complaint (known as a "Form 4") has been lodged with the courts, and Mr Showler has been summonsed to explain himself. We understand that he might very shortly be an ex-bailiff. Further, there is good evidence to assert that Mr Showler has breached the provisions of the Fraud Act 2006, and it is quite probable that his employer, Equita, is guilty of conspiracy to defraud.

Happily, we are told, "Every employee at Equita works with a balance of firmness and sensitivity. You can rest safe in the knowledge that everyone, from our customer focused and approachable telephone specialists to our experienced City & Guilds trained field agents, have a sound, practical knowledge of the latest public sector regulations".

After initially dismissing the matter as "civil" - as did the West Yorkshire plods with my complaint - Durham Constabulary has now been persuaded to entertain this matter, and investigations are in hand. We live in hope that Showler will shortly not only be an ex-bailiff, but a banged-up ex-bailiff. Here, though, there is a long way to go.

Of course, Peter could have avoided the initial unpleasantness by paying his fine. But who amongst us has not suffered a red-mist attack on receipt of one of these insolent imposts, and dug their heels in? For Peter, this has been something of a crusade, stretching over many years. He is now contemplating paying off the £60, possibly on the basis that the victim's compensation that may become due will more than cover the cost.

Had he done what so many people do, and rolled over, he would now be considerably out of pocket and Mr Showler would still be at large, ripping off a gullible public.

I call that a result.