So where do we go from here? 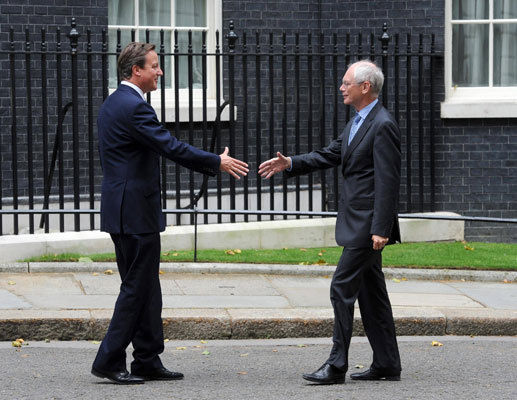 While the Idiot Boy greets the would-be Führer of Europe as if he was a long-lost brother (pictured above), the Express and others fulminate over Dave's refusal to give "us" a referendum – despite a petition deposited at 10 Downing Street. There, no doubt, it would be used to keep down energy bills if they still had open fires.

The petition was never going to go anywhere anyway, with the Daily Mail reporting that the whole idea of a Westminster debate has descended into a farce.

We cannot record any dismay at the refusal. Our objections to the idea of an in/out referendum have been made, and do not need repetition. But there is one beneficial effect of the activity – it increases the dissatisfaction with Cameron, which cannot help but advance the cause over time.

One possible danger is the upsurge of Tory "euroscepticism", but as my erstwhile co-editor very quickly discerned, this is nothing but a ploy. Furthermore, so transparent is it that very few people will be convinced that the Conservatives are serious about "Europe". It is likely to have an effect only on MPs and other of the weaker members of our society.

Come the conference season though, there are the party faithful to entertain, and a display of ritual "eurobashing" always plays well with the troops. The Idiot Boy needs to convince them that he is going to be "tough on Europe", and the Eustice charade all lends a touch of drama – and a useful diversion from other issues.

Nevertheless, despite the europlastics' attempts to hijack the eurosceptic agenda, nothing much has actually changed. The Idiot Boy is as much a europhile as ever he was, his Tory supporters are variously every bit as duplicitous and gullible as ever they were, and the MSM is still populated by a lightweight commentariat which is unwilling or unable to discern the difference between a real eurosceptic and the plastic variety.

What particularly has not changed is any sense that the eurosceptic community is getting is act together. Too many simply oppose the EU for the sake of it, without any clear idea of what they would want as an alternative. Others still hanker after the "Commonwealth, King and Country" paradigm, despite it being dead in the water since the 50s and before.

Possibly, the only encouraging thing on the horizon is the propensity of the EU to self-destruct – nothing particularly new in that, although it is closer now than it has ever been.

That could provide the answer to the plastics as well as the sceptics. We can all keep spouting our own brand of rhetoric and when the EU does collapse in a pile of its own ordure, we can all claim the credit.  – and only then start thinking about how we clear up the mess.

My personal worry in all this is that the consequences of a collapse will be so severe and so prolonged, that there will emerge a real Führer, one able to stop the traffic in Brussels and elsewhere, and a lot more besides. By that time, the mess might be more than any of us can deal with.