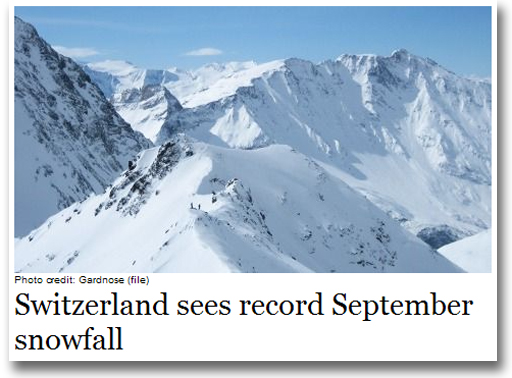 With the MSM relaying a forecast that we are in for an early winter, the Swiss weather agency Meteosuisse has reported snow in the Swiss Alps - to levels unseen for the month of September.

In the ski resort of St Moritz, in the southeast canton of Grison, nearly 18 inches of snow was recorded. The snowfall provoked traffic disturbances in the mountains, with the St Bernard, Flüela and Nufenen passes closed, according to ViaSuisse, which reports on the condition of Swiss roads. The Gothard, Lukmanier and Oberalp passes were also covered in snow

An early appearance of winter has also hit western Austria, bringing railway traffic to a halt in Salzburg. More than 200 passengers were trapped in trains for hours after trees collapsed under the weight of the snow and landed on the tracks.

Several roads in western Austria were closed for traffic after substantial amounts of snow blanketed Salzburg and Tyrol. Around 22,000 households in Tyrol were cut off from electricity supplies for hours. Drivers had to apply snow chains to the tyres of their cars and trucks on some mountain pass roads which were not shut due to the conditions.

As a result of the snows, an early start to the ski season is expected in Switzerland and Austria. Spa resorts and city hotels are expected to benefit from the current conditions.

Here, in the UK, we have not seen anything which would even approach an Indian summer, after an indifferent and at times chilly August. We do seem set for what would be the fourth bad winter in a row. And no matter how the warmists try to spin it, their religion is not going to survive another long bout of extreme cold and snowy conditions.

One wonders also whether the politicians understand what they are letting themselves in for. When the cold really sets in, their foolish mantras about the need to save the planet are going to look increasingly pathetic, and what little is left of the credibility of the political classes will be shot to pieces.