A fraud found out 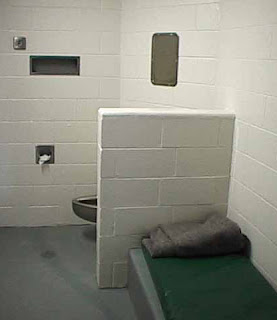 As Booker recounted in his column of the period, it was actually just a few days before Christmas in 2004 when I last seriously confronted Bradford MDC over Council Tax and, as I recorded on my own blog, the result was that I was raided by the police and locked in a cell over the weekend.

My offence at this time was to withhold Council Tax in protest at the lack of police attention to the spate of burglaries in our street, culminating in Mrs EU Referendum's car being broken into overnight.

The interesting thing here is I got locked up for not paying it. Yet here we are in 2011 and I owe £316 to the council in unpaid Council Tax, which I am refusing to pay … and they roll over and waive fees already paid, in order then to relieve themselves the obligation of pursuing me for the unpaid sum. What is going on?

Part, if not all the answer is most certainly that the Assistant Director of Finance, Martin Stubbs, is not at all confident that, if the matter went to court, he would be able to enforce the sum – and his failure to do so would set something of a precedent, putting at risk a multi-million income stream, the bulk of which is almost certainly illegally charged.

The essence of this, which we set out in an earlier post is the nationwide – but still illegal – practice of overcharging on summons and liability order fees, over and above the "costs reasonably incurred" that the law permits.

Having refused to pay £80 for the two, and told Bradford MDC that I would be willing to pay only that which was legally justifiable (which cannot be more than £10), it is no wonder that Stubbs was falling over himself to waive the charges, rather than face a legal challenge.

Far from leaving it there, however, EU Referendum readers have embarked on putting an FOI question to local authorities throughout the country in an attempt to assess the scale of what amounts to wholesale fraud – possibly amounting to £1 billion or more. This is the question being asked:

Predictably, local authorities have been slow to respond, but we have now had the first full result in, from Ipswich Borough Council (chart illustrated below). It would appear that the practice of charging for Council Tax summonses started in this borough in the financial year 2004/5, when it was set at £10. Then, seven years ago, the revenue from both summonses and liability orders did not exceed £200,000.

For the last full financial year, 2010/11, the summons charge has increased to £65 – a whopping 650 percent increase on 2004/5 - and the total revenue has more than quadrupled, for a 30 percent increase in summonses and liability order notices sent out.

This gives a very clear indication that these charges for summonses and liability orders are indeed being used to generate revenue. Other documents in my possession indicate of councils in general that this is indeed the case.

Total revenue charged by Ipswich over the period from 2003/4 up to and including the last full financial year is in the order of £3.5 million. With about 100,000 summonses and order notices sent out, it would be very hard to justify more than £1 million (being extremely generous) in Council costs, making the fraudulent overcharge in the region of £2.5 million.

If this was replicated throughout the country, it would amount to a national overcharge of £1 billion, which is at the lower end of our original estimate. Obviously, as more figures come in, the estimate on the extent of the fraud will firm up, so the more local authorities quizzed the better.

Then, when we have good figures on the scale of the fraud, we need to challenge local authorities on how they came by their figures, and then we roll out a programme of forcing the return of the money stolen. And, with a bit of luck and diligence, I hope to be able to return the favour to my erstwhile jailers, and have some of them locked up as well.