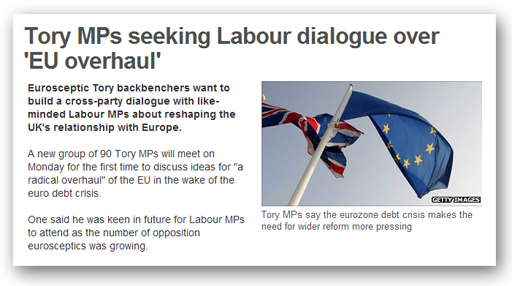 It is actually very difficult to know whether to laugh or cry, as the Tory europlastics continue with their game show. Still they are talking about "reshaping the UK's relationship with Europe" and now, to add unreality to unreality they are – or so we are told - wanting to "build a cross-party dialogue with like-minded Labour MPs".

It is unlikely whether they can find even Labour MPs that feeble-minded, but once you start down a road which has as much in common with reality as the Mad Hatter's tea party, I suppose anything goes.

But you just know these people are not serious when George Eustice pops up to tell us his group is looking to promote a "sensible discussion about how we can radically overhaul the EU and make it fit for purpose in the 21st Century".

"We need to end the presumption of ever-closer union," says Eustice, then adding: "There is already a strong case for some of these powers being repatriated to national Parliaments".

But just so that you know that we are dealing here with a man who is not at all serious, he then comes up with this tosh: "We have a eurosceptic prime minister and a Conservative Party which means business. We want to work with the government".

There really is no way you can take Eustice or his merry men seriously - you simply can't have any truck with people who want to make the EU "fit for purpose" and then go around calling themselves eurosceptics.

The only possible explanation for their bizarre behaviour is that they must be hoping that their talk of euroscepticism will fool enough people to attract them into the Tory fold over the next election. Mainly, though, it has to be said that they are fooling themselves. At least there, they have set themselves a very easy task.