The Siege of Bradford 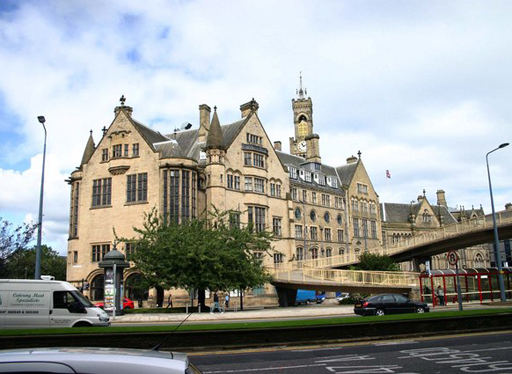 What should be a simple matter could never be and never will be, not when you are up against the bureaucracy of a local council. The people are as thick as the Town Hall they occupy (above).

In the continuing drama of the Council Tax, we have finally impressed upon the council that the money has been paid. And, in the manner of nerve impulses travelling from the head of a dinosaur to its tail, that singular fact has been communicated to Jacobs bailiffs.

To consider that this should then be the end of the matter is, of course, to reckon without the density of a Mr R Parker, Council Tax Section Manager – Enforcement Revenue Service.

He notes that I am "unhappy" that my Council Tax charges have been passed to the bailiffs, thereby missing the point and imputing to me a state of mind which I could best describe as inaccurate. Seriously angry might be closer, but not about the charges being passed to the bailiff. It is their attempt to steal money which brings on the red mist.

Mr Parker, though, is not the stuff that is going to let such matters trouble him. Citing the wrong law, he blithely tells me that all the correct procedures have been followed. Bizarrely, he then confirms that so-called "phantom visits" have been made, for which charges cannot legally be made yet which have been levied.

So open is Mr Parker about this – on the basis of information supplied by the bailiffs – that one suspects that he doesn't actually know the law. Neither do the bailiffs, I also suspect. Thus, he is quite content, as he informs me, to instruct the bailiffs to return to EURef Towers to collect what he believes to be their lawfully assessed fees.

With a private prosecution for fraud on the cards, and my having now made allegations of fraud to him by way of a formal complaint, I have gently informed Parker that he should not expect me to pay over any money to Jacobs and indeed I will not.

Should any attempt be made by the bailiffs to perpetuate or continue their criminal actions, I have told him, I will of course call the police (not that that will do any good), and at the same time notify the press. But it goes without saying that the bailiffs will not be allowed entry and any unlawful attempt to gain entry will be resisted, in a lawful and proportionate manner.

As to Parker himself, I have also told him that if he persists in supporting the bailiffs in fraudulently obtaining money from me, or in enjoining or in any way encouraging me to pay over such monies, he could be considered personally liable for the offence of conspiracy to commit fraud. I am quite willing to join him in any prosecution directed at Jacobs, if that is his wish.

It would be rather fitting to have a Town Hall bureaucrat banged up, but at this stage I am not sure whether the offence would be fraud, or mere stupidity.  Meanwhile, the drawbridge has been raised and the boiling oil is on the stove.  We are under siege.