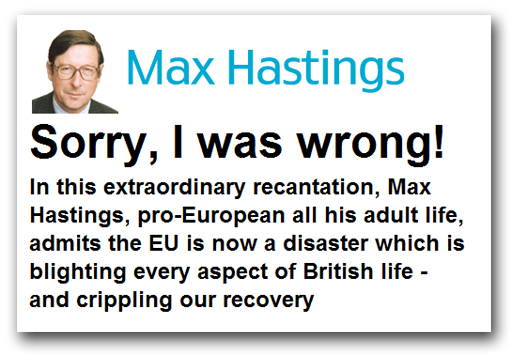 All his adult life, Max Hastings has called himself a "pro-European". He deplored Brussels’ follies as much as anyone but – or so he tells us - went on hoping for better things. He believed "Europe" was broadly a force for good.

But today, he recants. After much agonising and hesitation, he adopts the conclusion that, he says, "many of you probably reached years ago: that the EU in its present form has become a disaster, which threatens the future of its major members, unless its terms and powers are drastically recast".

And why should we be impressed? The man still doesn't get it. First, it is not a question of the EU having become a disaster. It has always been a disaster. The difference is that, only now, is this becoming obvious to the likes of above-the-liners like Hastings.

Second, the EU in any form where it retained its identity as a supranational authority would be a disaster. Its terms and powers could not be drastically recast without it becoming something completely different. It would cease to be the EU.

Thirdly, the chance of the EU agreeing to recast its terms and powers is nil, and the ability of the UK to force it to do so is also nil. Hastings is baying at the moon. The only way to escape being dragged down by the disaster is to quit the EU.

Interestingly, this man who now admits to having lacked the judgement to see the EU for the disaster it is and always has been, now admits that it is "no longer impossible to imagine Britain's absolute withdrawal from Europe".

But he still rejects "the crude jingoism of the UK Independence Party, which ignores the practicalities of avoiding a breach with our vital trading partners". This Great Man, unlike the rest of us, "realises that quitting Europe would engage us in a crisis that would sap the entire energy and attentions of any British government for years".

So he dribbles down the Eustice path. It has become essential to repatriate powers from Brussels, he says. This is not in furtherance of isolationism, but of the economic imperative to strengthen our competitive position in the world and repair our social fabric. And, the Great Man tells us, "we must regain control of Britain’s borders, loss of which has inflicted wholly unwelcome social change".

But he still rejects the notion that Britain "should embrace lonely isolation, enfolded in the flag. The closest possible trading relationship with Europe's major economic powers is indispensable", he says.

Nevertheless, this Great Man concludes, if Britain's government cannot find the means to retrieve some part of our lost control of vital national interests, we shall find ourselves mere fellow passengers with our EU partners aboard a waterlogged hulk. Meanwhile, he writes, the Chinese, Indians, South Koreans and Singaporeans will power past in their glittering speedboats, leaving us bobbing in the wake.

And that, dear readers, is what passes for informed comment in the mindwash. After all these years, the man still can't put two and two together and make four. Yet, somehow, they expect us to take what they write seriously?