The Siege of Bradford – day three 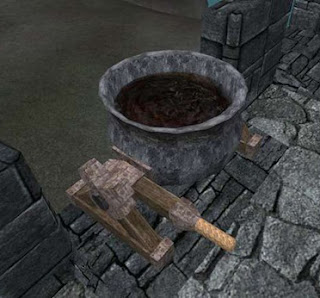 Having returned safely from her foraging expedition, Mrs EU Referendum is now getting seriously worried about the stains on the ceiling from the continuous boiling of pitch. No longer does the trusty mix of dried rat droppings and vitriol yield its miracle results, in consequence of which she is seriously considering reverting to vegetable oil.

This would at least have the merits of allowing her to fry chip butties while we wait for the bailiffs. These could also provide an alternative source of ammunition, should the need arise. And then, of course, it vastly improves the carbon signature.

Spies in the enemy camp, meanwhile, report of some disarray. Martin Stubbs - none other than Assistant Director, Revenues & Benefits – is said to be struggling to understand what has been happening. This is the Hard Man of Bradford, routinely jailing the good (and bad) citizens of the City in order to keep the money flowing to the staff pension fund.

Hilariously, this is also the same Martin Stubbs who, two years ago, came over all precious when a group of scammers started contacting people pretending to be from the council. The bogus officials were telling householders that they had not paid enough Council Tax and unless they made an immediate payment they would be taken to court.

Stubbs the Terrible expressed his "concern", but then left it to sidekick Tim Eden to say: "This is outrageous and targets vulnerable people … People must not pay any attention to these crooks and should report such calls to the police. Some of the callers are very aggressive and intimidating to make people pay up, but people should not be fooled into thinking these calls are legitimate". But how would they know the difference?, I muse.

Nevertheless, cranking into action, we also had Andrew Bibby from West Yorkshire Trading Standards Office. Girding his loins, he sternly declared that: "Trading Standards can and will take action against doorstep callers who make false or misleading claims about their services offer or the organisations they represent".

Now the boot is on the other foot and The Stubbs seems to have enormous difficulty understanding that it is now his own people who are the crooks, "targeting vulnerable people", some of whom are “very aggressive and intimidating".

Needless to say, confronted with official thuggery and theft, neither the police nor Trading Standards are anywhere to be seen. Thus, if you want to be a con artist and rip-off people on the doorsteps, the trick is to call yourself a bailiff and work for the council. Then the officials will back you to the hilt.

And therein lies the fate of Stubbs the Terrible, taker of houses and slayer of all who go before him. His dim little brain simply cannot grasp that it is he who is the crook, the thief, the con artist.

But then, when you have a chief executive on £182,571, you have to screw down hard to get the money in. "It is really important that people don't bury their heads in the sand about their Council Tax bills", he says. The poor wee man has mouths to feed and pockets to fill.

Anyhow, the chip butties are bubbling away nicely just now, so I must depart to stack the ammunition.