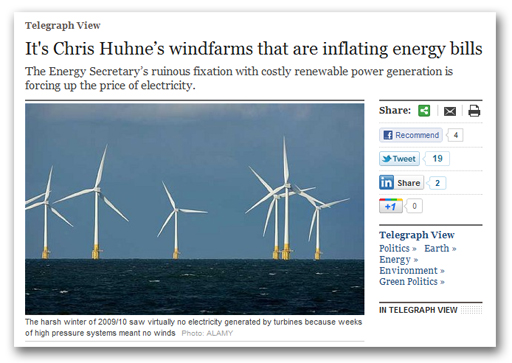 It was in January last year that the Failygraph woke up to the fact that wind factories were costing us a huge amount in subsidies. Now, not far short of two years later, it finally wakes up to the fact that these subsidies are massively inflating our electricity bills.

I suppose we should all be grateful that these mighty heralds have peered through the misty walls of their bubble and seen something of the reality, about which we have been writing and complaining for many years.

Somehow, though, I cannot find it in my heart to be generous. Today's leader is tomorrow's chip wrapper and, in the electronic version, not even that. Unless the Failygraph is prepared to follow this through, with a high-profile campaign, the leader is just so many words.

Further, since the provision of wind farms is now embedded in EU policy, supported by all main parties, what does it matter if the Failygraph does protest? Unless it is prepared to address the core problem of our membership of the EU, its protests will have no effect whatsoever.

Thus, welcome though this leader might be, it is still dribble. If there is to be change, it is still going to be we the people who are going to have to force it through. As with the bailiff issue, it occurs to me that direct action might be called for. I have some ideas, and will be writing further on the issue in the near future.

Meanwhile, Booker has done a superb piece in the Daily Mail on the Times Atlas debacle. That adds to the growing body of work which puts the warmists on the back foot. But it is now time to take the battle to the corporates.