A reason – give me a reason 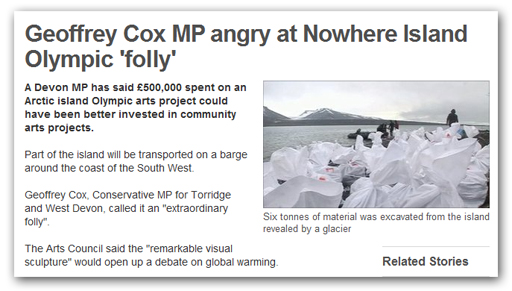 Artist Alex Hartley and 18 volunteers excavated about six tonnes of material from an island exposed by a retreating glacier on the Svalbard peninsula in Norway. The material will be sculpted into a piece of art called Nowhere Island and floated along the South West coast for the 2012 Cultural Olympiad.

It is one of 12 arts projects funded by the Arts Council to represent each of the UK regions as part of the Cultural Olympiad to run alongside the sporting events in 2012.

Mr Cox said: "I think my constituents are going to find it quite astonishing that, at a time when thousands of people are losing their jobs and when the country is on the brink of bankruptcy, we are spending half a million pounds digging up earth from somewhere in Norway and floating it down the South West coast.

If there is a good reason why we should not rise up and slaughter them, I really would like to know it.

COMMENT: "NOT ONLY NECESSARY" THREAD
Posted by Richard at 12:45