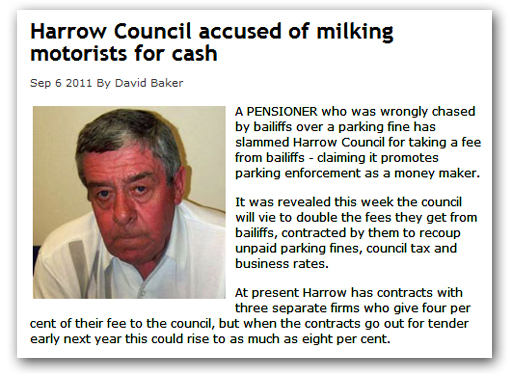 For reasons which I cannot at this moment divulge, I am able to say with absolute confidence that the practice we have been reporting - of bailiffs charging for "work" which they have not carried out – is now formally accepted by the police as a potential criminal offence under the Fraud Act 2006.

But, as an added and unexpected bonus, we are also told that anyone involved in this practice could face charges of conspiracy to commit fraud by false representation, possessing articles for use in fraud and making or supplying articles used in fraud.

Where this gets really interesting is that the prime responsibility for the conduct of bailiffs who are collecting council debt remains with the council. The bailiffs are only the agents, and councils are fully liable for the actions of those agents. They cannot walk away … the responsibility is a matter of law.

It is, of course, a reasonable defence for individuals to declare that they did not know what their bailiffs were doing – and could not reasonably have been expected to know. But where individual officers have been specifically told that their bailiffs appear to be acting illegally, and they do not take "appropriate" action, then they become complicit in the offence.

What is not a defence in law is the claim that "everybody does it" and/or that "it has been going on for years". It may be recalled that this line was tried by some MPs over their expenses, and it did not get them very far.

However, as this article points out, the practices which we now know to be illegal have been going on for years, to the extent that they have become "industry practice", turning council debt recovery into one vast criminal conspiracy.

But what is now driving this into the stratosphere is this article in the Harrow Observer, by David Baker (above), which reports that Harrow council is taking a commission from the bailiffs' fees. Not only is this illegal, it demonstrates that this councils is an active part of the conspiracy, taking a "cut" from the proceeds of crime.

The story itself is a familiar one, with bailiffs chasing a parking fine, hugely inflating the fees, so that £50 ends up as £445 – with the added twist that the original sum wasn't actually owed. It had been charged in error after a parking ticket had been duplicated.

But what is both chilling and damning is the way Fernando Silverio, Divisional Director of collections and housing benefit at Harrow Council, incriminates himself and his council.

Defended the council's decision to take a fee, he starts by saying: "Harrow residents rely on the services we provide, and we need to collect council tax, business rates and other charges to pay for them".

Digging the hole a little bit deeper, he then says: "We offer a range of help to anyone who is unable to pay for whatever reason, to spread their payments. Instructing bailiffs to recover debt is an absolute last resort and we must go to court to get agreement that this is the only option left to us".

Now, with his head barely above the rim of the hole he has dug himself, he says: "We do not pay bailiffs to recover debt. Instead they charge fees to the debtors and five years ago we agreed that the Council would receive around four percent of those fees to help cover our costs".

Then, practically putting the handcuffs around his own wrists, he admits: "With the contract ending next year, and the difficult financial climate we are in, there is an opportunity to look at improving the deal we have with the bailiffs".

Slamming the door and throwing away the key, he then concludes: "Increasing our income will help cover costs and pay for the services we provide and this is an innovative way of meeting the funding challenge we face with absolutely no impact on the vast majority of our residents".

Fees charged to debtors must, of course, either be the statutory amount, or on a strict cost recovery basis – actual costs incurred. There is no provision for paying a commission and it is not legal for councils to make a profit out of debt recovery to subsidise the revenue collection operation, or to support other services.

What we must now find out is how many other councils are taking "cuts" from their bailiffs – more FOIs needed. I will draft a question and post it when it is ready. For the moment, though, it looks as if an already king-sized can of worms just got bigger.