Playing with the faeries 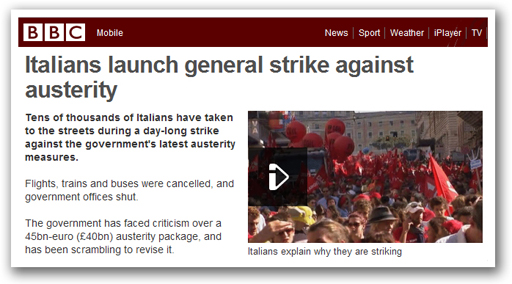 Listening to the Idiot Boy yesterday (which I did for a brief period before nausea got the better of me), you would think that he had not a trouble in the world and that everything in the eurozone could be sorted with a few little tweaks.

Such was the unreality of dissertation though, that even as he spoke, the Italians were on a general strike and marching in the streets against the austerity programme.

Cameron simply does not get it. The world is changing around him at a frightening rate and, as far as the euro goes, it is not a question on whether, but when it is going to collapse. And the longer the "colleagues" try to shore it up, the more spectacular will be the crash, as it will be forced upon them. There will be no managed retreat.

This collapse will also presage the start of the fall of the European Union. If the Lisbon Treaty was the high water mark of integration, there has been stasis ever since and now the EU is having to confront a reversal of its political programme. This, it cannot sustain – the very essence of the "project" is continual forward movement. Going backwards isn't in the script.

But what is so utterly bizarre is that there is no recognition within the political bubble of what is so glaringly obvious to us all outside the bubble. Even Bill Cash (or especially Bill Cash) does not seem to have taken on board the imminence of the collapse.

But this is a time when we should be gearing ourselves for a new political paradigm, discussing our next moves and what we want this nation and the world to look like in the next ten years (insofar as we have any influence or control). Instead, we get nothing, a complete vacuum, a total rejection of the reality and a refusal even to acknowledge that there is a world outside the bubble.

I almost have to pinch myself these days, to check that I am not living through a weird dream. This is beyond my experience and if there is a historic parallel, I would like to know what it is. Whatever that might be, it cannot be good. When the political classes do detach themselves from reality and start playing with the faeries, it always bodes ill.