A stealth tax on the poor 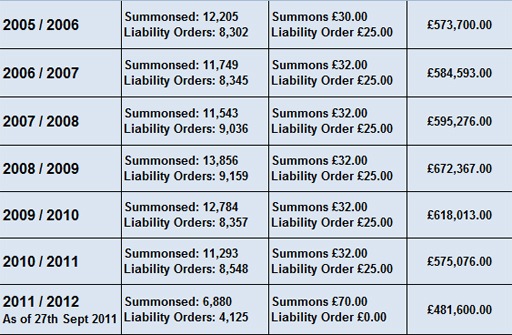 Another result is in from the survey of Council Tax summons/liability order costs – this one from NE Lincolnshire. From a tax base of 69,171 households, it took in £575,000 in fees from over 11,000 summonses in the last full financial year, thus emerging in the top ranks of charging authorities, with one in six households getting a summons.

What is highly significant, however, is the internal council budget document for 2011, which puts "summons costs" in the category not of cost recovery but of "income generation", the council aiming to increase revenue by £188,000 for this and the following three financial years (see below).

Six months into the financial year, the local authority seems well on target, with an income of £481,600 so far, compared with £575,076 for the full financial year of 2010/11. It seems to have achieved that by upping the fees to £70 from £57, and also combining the charges into a single element.

This single fee means, of course, that people who receive summonses from NE Lincs and pay immediately on receipt still get charged for liability order hearing costs and the associated paperwork.

Since this is not authorised by the Council Tax (Administration and Enforcement) Regulations 1992 – see S.34 subsections (5), (7) and (8), which set up staged charges – it must be unlawful. The council should not be making this combined charge at all. It should be charging separately at each of the two stages.

The combination of a 22 percent increase in fees, however, plus combining the charges, has given the council its boost in income, the officials having completely lost sight of the fact that they are imposing their levy on some of the poorest and most vulnerable in their community, from whom they are only allowed to cover "costs reasonably incurred".

Further insight into the charging scheme comes from a finance officer in another local authority. He tells me how charges are calculated. Basically, the cost of the entire revenue collection operation is assessed, from which all costs incurred up to the summons stage are deducted. The remainder is then divided by the average number of summonses, and then the gross figure is (in most councils) split arbitrarily between summons and liability order.

In effect, once the bills and reminders have been sent out, debtors are paying for the entire cost of the collection operation. This is not what the legislation permits – allowing costs only in relation to the application for and obtaining liability orders. Nothing there permits councils to make debtors subsidise their entire recovery operations.

The trouble is that this institutional bad practice is now customary and has become so far detached from its legal base that it is regarded as just another revenue-generating opportunity. This turns it into what amounts to a stealth tax on the poor.

No doubt NE Lincs chief executive Tony Hunter will be eternally grateful for the contributions though. With a remuneration package of £184,667 – which included £31,610 annual pension contributions (more than most of his Council Tax payers earn) and £3,057 expenses allowances - he stands to benefit hugely from them.