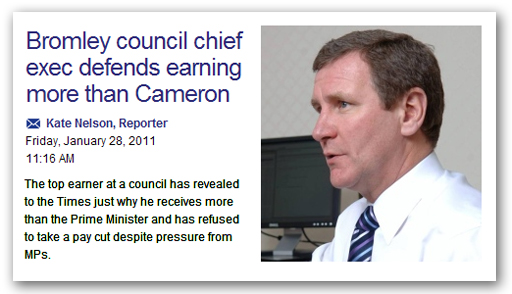 After refusing to take a pay cut, chief executive of Bromley council, Doug Patterson, says his £185,000 salary is justified because he "provides value for money".

That, of course, is debatable. But the one thing which cannot be disputed is that he certainly rakes it in. The London Borough at the extreme south-east of the city is the largest in London, occupying 59 square miles and boasting a population of 302,600.

In the last full financial year, 11,359 of those people received liability orders for non-payment of Council Tax, with defaulters paying £1,425,905 in fees for summonses, charged at £75 each, and the liability orders – a snip at £20 each.

Altogether, since the 1992 Council Tax (Administration and Enforcement) Regulations, the Borough has issued over 50,000 summonses and liability order notices, extracting £13.2 million in fees – of which at least £12.5 million represents an illegal overcharge. 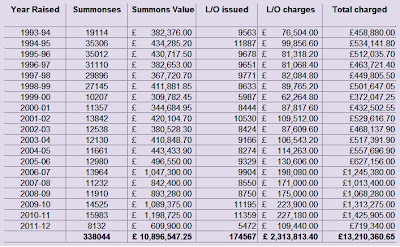 With summons fees as low as £12 in 1994, the turning point in this revenue-generating scam came in 2006, when summons fees shot from £40 to £75 – where they remain today – generating for the first time revenue in excess of £1 million - see chart above.

Despite the avarice, however, the population to liability order ratio remains relatively modest, at 1:55. The healthy revenue comes as a result of the size of the borough and the relatively high fees, totalling £95 for summons and liability order.

Interestingly, in terms of costs, producing the liability order required £3 Magistrates' fees and court time for officials, making this document significantly more costly to produce. Yet Bromley chooses to top load the summonses, charging nearly four times the price of the liability order.

This would tend to reinforce the claims that the actual fees levied bear no relation to the costs, and simply represent an easy – if illegal - "hit" against those least able to afford it, and least likely to have their complaints heard.

Still, Mr Patterson can rest easily, knowing that his handsome salary is paid-for by the poorest and weakest in the community, with substantial change to spare. He could even afford a pay rise.

COMMENT: "ROBBING THE POOR" THREAD
Posted by Richard at 22:06