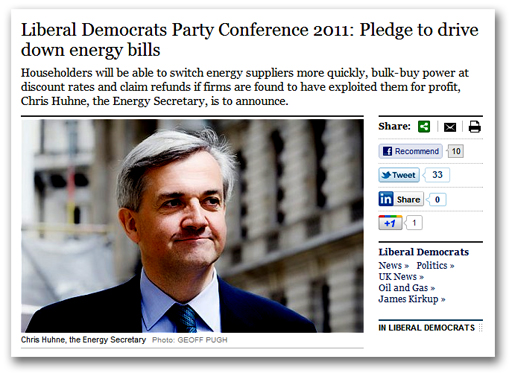 This man is shameless in the way he seeks to divert attention from the effects of his own policies to the behaviour of the energy companies. I suppose some people might be fooled by his tactics – especially the self-deluding greens – but more generally I think it is a case of "a plague on both your houses".

Already, he has tried our patience, putting the blame on "lazy householders" for high energy bills because "they can't be bothered to shop around".

This is another classic example of politicians being out of touch. I've changed energy suppliers and it is not that simple. Apart from anything else, working out which is the better rate is not straightforward. Then the process of clearing accounts, swapping over direct debits and organising the transition can be fraught.

Not least of the problems is that none of the suppliers seem to have their own meter readers, and those that are employed seem not to communicate their findings to the companies they appear to serve.

But greatest dishonesty on the part of Huhne is in respect of those on lower incomes and those with debt troubles – now running into millions. The secretive policy of avoiding disconnections and forcibly putting people onto pre-paid meters means that for those people swapping suppliers is not an option.

Not only are these people paying a higher tariff, if they have a pre-paid meter, no other supplier wants to know them.

Few politicians seem to understand this – and even fewer seem prepared to find out. Being poor often means paying more than the better off for commodities such as energy, while there are always the predatory bailiffs hovering in the background for when they stumble.

It is easy then for multi-millionaire Huhne to posture and preen. But he clearly has little idea what being poor is all about, and obviously cares less. As long as he can get the cheap applause at his party conference – where he is running interference for his own policies – that is all that seems to matter.