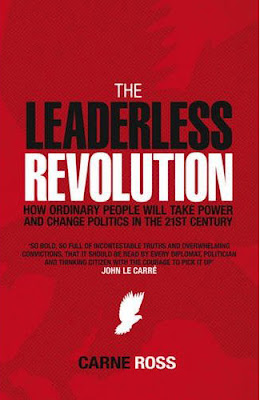 I ordered the book yesterday and it arrived today. Capitalism works – or some of it does. After a quick scan, though, the text seems unimpressive, splattered with leftie tosh and stream of consciousness mush. But what is attractive is the title (which is why I bought it) and the thinking behind it. That is what we're all about. That is what the Siege of Bradford is about, and that is why the fight continues.

The point is that we are not talking here about a little local difficulty. Withholding Council Tax is, in my view, a perfectly legitimate protest and one I have been making for many years. But, in so doing we have become aware of the deep-seated illegality and corruption which pervades local government as a whole, and goes all the way to the top.

What has been happening, it seems, is highly political – resting on the acute sensitivity of the headline rate of Council Tax and the need to make appear to be under control. Therefore, the rate has been set at a level below which the Councils have become accustomed.

Rather than trim their horns, though, Councils have sought increasingly to identify and develop additional income streams and, over term, have sought to defray revenue collection costs by turning debt recovery into a profit centre.

Alongside this, as Council Tax has progressively increased – and the recession bites – collection has become more difficult and expensive. As a result, more and more councils are using private companies supplying certificated bailiffs to collect outstanding tax. These companies either provide the service free of charge to the councils or, as in the case of Harrow, actually pay a commission.

Now, this is where the situation gets really murky. The bailiff companies themselves have made it transparently clear to government, both at central government level in the Ministry of Justice, and at local government level, that they cannot operate profitably (or at all) on the current, statutory level of fees. It is simply not possible to run a high-overhead business on the income levels permitted by law.

However, if raising the level of Council Tax is politically sensitive, even more so is the level of statutory bailiff fees. Hence, the Ministry of Justice has rejected the lobbying from the bailiff companies, and kept the fees capped, below an economic rate.

To compensate for this, the bailiffs have developed a strategy – which is now standard throughout the industry – of making statutory charges for visits not actually made, charging for the seizure of goods, without actually having seized them, and then making additional charges for any actual seizure, over and above the statutory scale and allowances.

All of the above is quite clearly illegal, breaching various provisions of the Fraud Act 2006, to the extent that the whole industry is now one vast criminal enterprise – organised crime on an industrial scale, taking in probably £300 million or more in illegal fees each year, from Council Tax collection alone.

Significant amounts also come from non-domestic rates, and massive amounts come from parking fines and similar levies. In all, the illegal turnover (including top-ups pocketed by the bailiffs themselves) probably exceeds £1 billion a year.

And it is here that lies the true scandal. From the Ministry of Justice, through to the mass of local authorities, the majority which use private bailiff companies – all of them know of the illegality. They tolerate it, turn a blind eye to it and then bully, bludgeon, and bluff any taxpayers who have the temerity to complain. Should individuals persist, they attempt to buy them off, as they have sought to do with me.

So deep-rooted is this illegality that it is ignored by the police, by the courts system and by the media – especially the local media, which simply will not run stories about illegal actions by council-employed bailiffs, no matter what the source of the story. Similarly, local councillors largely turn a blind eye – or reside in happy ignorance. And, as always, most MPs are a complete waste of space, refusing to take any interest in the issue.

Part of the reason for the silence is that the Councils themselves are running their own illegal scam, imposing their fees on summonses and liability orders, well in excess of the "reasonably incurred" level permitted by law. And on this, the Magistrates and the courts system are especially complicit, approving the illegality and taking a cut from the proceeds. This people who would seek to judge us are themselves complicit in a vast, illegal industry.

Thus, we have government itself becoming a vast criminal enterprise, running roughshod through the law for the sake of political expediency. We do not need a Mafia in this country – the government is the Mafia, corrupt to the very core, with the bailiffs taking on the role of the bully-boy enforcers, keeping – with the tacit and sometime active support of the police – the population cowed and obedient.

This is the stuff of revolution. But, as the book title goes, to succeed, it has to be a leaderless revolution. We are not going to rise up with a Great Leader at the head of the mob. Each and every one of us has to take on this corrupt system – of which I have sketched but one part – and fight it as best we can. We need a million pinpricks. That will bring this monster down.