From Hell, Hull and Halifax … 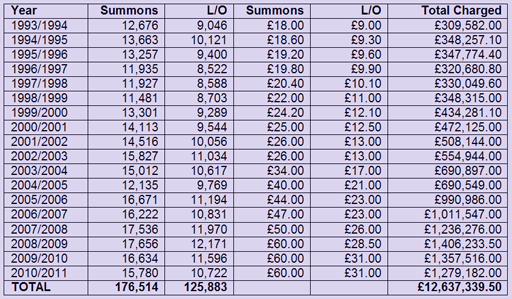 Hull is not yet on the menu and we have not ascertained the Council Tax rate for a residence in Hell, although the liability orders are of a completely different kind. That then leaves Halifax or, more specifically, Calderdale Council, which has responded with speed and efficiency to our FOI request.

What is uncanny about these figures is that they yield a total charge of just over £12.6 million, within spitting distance of the total charged by the very much larger LB Bromley, with its population of 302,600 – against Calderdale's 200,100. A further apparent anomaly is that, while Bromley has sent out nearly 450,000 summonses and liability orders, the Calderdale total is only about 200,000 over the same 18-year period.

Basically, in historic terms, the impoverished Calderdale up on the flanks of the Yorkshire Pennines, has needed twice as much cash as affluent Bromley to produce the same documentation.

Currently, though, with Calderdale charging £91 for a set of documents and Bromley £95, while Calderdale's neighbour Bradford charges a "mere" £80, there does not seem a great deal of logic in the charging, even if it is taken at face value.

Work on an actual cost basis and there is even less logic. One might be looking at an illegal overcharge approaching £12 million. And with the high volume of paperwork churned out, it is very had to avoid the conclusion that debtors are being used as an additional – and illegal - revenue stream.

We have more answers to process and when those are done, I will produce a ranking – based on summonses and dwellings. In this, Bradford produces a startling result – one in four dwellings received a summons last year. Calderdale is not far behind, with one in five.

COMMENT: "ROBBING THE POOR" THREAD
Posted by Richard at 16:40